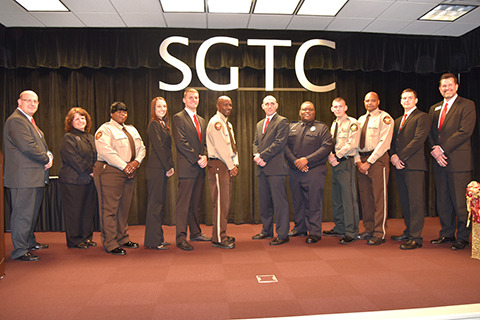 AMERICUS — South Georgia Technical College (SGTC) recently hosted its Law Enforcement Academy (LEA) graduation for class 16-02, which was held in the John M. Pope Industrial Technology Center on SGTC’s Americus campus. Nine cadets were recognized for earning their technical certificate of credit and POST (Peace Officers Standards and Training) certification at the ceremony.
Graduates included Wesley Phillip Atchley of Edison, Michael Steven Bentley of Leesburg, Robert Gene Fairbanks of Edison, Tiffeni Ann Marie Fox of Warner Robins, Calvin Hodge Jr. of Leesburg, David Sims Jr. of Warwick, Joseph Paul Austin Smith of Americus, Joshua Wayne Taylor of Lizella, and Kendranna Walker of Dawson.
“Obviously, the hearts of our community are still tender after the tragic events of last week,” said SGTC President Watford, Ed.D., referring to the two slain law enforcement officers, Nick Smarr and Jody Smith of Americus, “but today is a time of celebration for our graduates. You have chosen to serve the public in a capacity that so few are brave and willing enough to do.”
Brett Murray, program director for the SGTC Law Enforcement Academy, gave a brief overview of the rigor that each of the nine graduates had to go through in order to receive their certification.
“On paper, the amount of hours these cadets are required to complete do not nearly equal the amount they put in, both inside and outside the classroom,” he said.
Dean for Academic Affairs Vanessa Wall addressed the families of the nine graduates.
“Unless you previously came from a law enforcement background, your lives are about to change,” she said. “These cadets will begin as rookies — they will work on holidays, on your birthday, on your anniversary — they will be scheduled for a 12-hour shift and make it home 16  hours later. They will eat, sleep, and breathe this profession.”
Wall and Murray presented awards to several of the cadets prior to conferring certificates. Those awards and their recipients included Austin Smith, Academic Achievement Award for earning the highest grade point average in the class; Joshua Wayne Taylor, the Top Gun Award for performing the best at the shooting range; and Wesley Phillip Atchley, Class Representative for being voted among his classmates to represent the class by speaking at graduation.
Scholarship awards were also presented to four of the graduates. Austin Smith and Tiffeni Fox received the Michael M. Sangster Law Enforcement Academy scholarship, and Robert Fairbanks and Joshua Taylor received the Lou Crouch Law Enforcement scholarship.
Cadet Robert Fairbanks led the audience in the invocation and pledge of allegiance. Cadet Wesley Atchley delivered remarks on behalf of the graduating class, and Cadet Tiffani Fox closed the program with the benediction.
The Law Enforcement Academy program takes over 18 weeks to complete and most recruits qualify for the HOPE Grant and other forms of financial aid. Admission standards require all students to undergo a thorough background check and adhere to all rules as set forth by the state POST Council. Students will also have to meet minimum scores in English, reading and math.
For more information about the Law Enforcement Academy contact the Law Enforcement Academy office at 229-931-2716 or SGTC Law Enforcement Director Brett Murray at 229-931-2756.