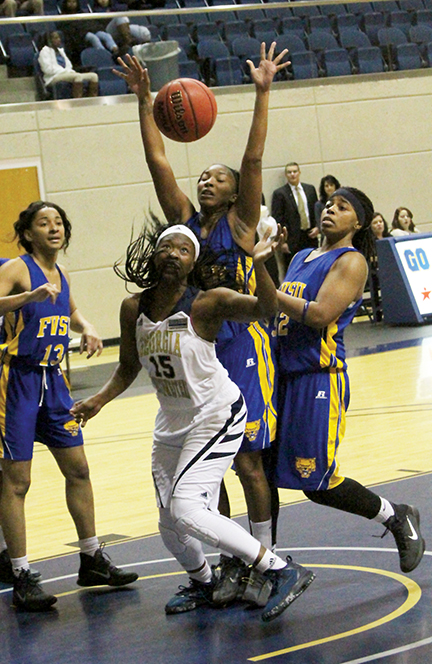 MICHAEL MURRAY I ATR: GSW’s Aleah Holden (15) earned her second double double of the season in the Lady ‘Canes’ Dec. 14 contest against FVSU.

AMERICUS – After winning their last five straight games, the Georgia Southwestern State University (GSW) women’s basketball team ended their non-conference play with a last-second loss to Fort Valley State on Dec. 14 in the Storm Dome in Americus.
With the defeat, GSW dropped to 5-2 while FVSU jumped to 2-7.
The Lady ‘Canes started strong with a 5-0 lead in the opening minutes. Khayla Owens made a layup and Shanya Jones scored three after stealing the ball, scoring and sinking a free throw. FVSU trailed by two for most of the first quarter and headed into the second down 12-10.
The Wildcats tied the game with two free throws to start the second quarter. Va’Queshia Hall took the lead back for the home team with a lay-up, but FVSU promptly scored two baskets to take the lead. Whitney Young then tied the game 16-16 and Chanice Whitton went on an eight point streak, followed by Mallory Diamond with a jump shot and a lay-up to help put the Lady Hurricanes up 28-16 with 3:29 left in the first half.
FVSU followed with a lay-up and a jumperto close the gap a little and Diamond put in two free throws to extend GSW’s lead to eight points. FVSU was able to sink a three-pointer and lay-up before halftime to trail 30-25.
The game was tied again after FVSU laid one in and tossed up a three-pointer to kick off the third quarter.
Hall put in a trey and a free throw, followed by Aleah Holden and Kris Beckham with layups to lead by seven. FVSU closed the gap to four points by the end of the third, trailing 43-39.
The fourth quarter was a battle until the very end. GSW was leading 59-56 with 1:15 remaining. The Wildcats made a basket to trail by one point with 41 seconds left and drained a three-pointer to take a two-point lead with nine seconds to go. Jones was fouled while attempting a three-pointer and deftly sank all three shots from the foul line give the hosts a one-point lead with five seconds left.
FVSU took a time out and advanced up the court and were able to make a basket with two seconds left to pull ahead by one point and earn a 63-62 win over the Lady ‘Canes.
Holden recorded her second double double of the season with 11 points and 10 rebounds. Hall scored 11 points and Diamond scored 10.
The Lady Hurricanes return to the hardwood on Dec. 17 for their first conference game against Francis Marion University at 1:30 p.m.