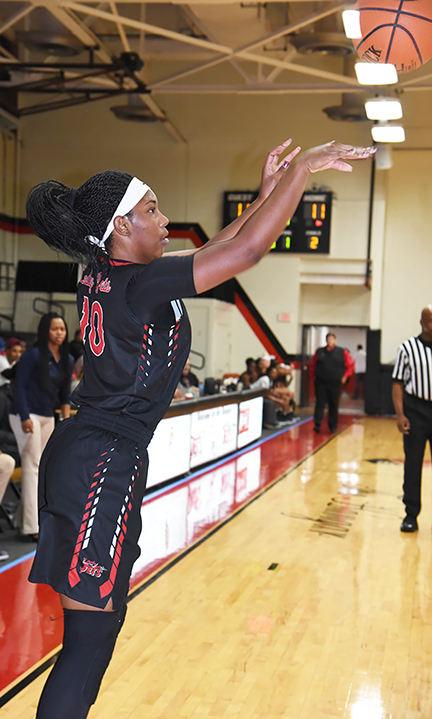 SUBMITTED BY SGTC: La’Deja James, 10, was the leading scorer for the Lady Jets in both games in the Florida Southwestern Classic in Ft. Myers, FL.

FT. MYERS, FL. – The South Georgia Technical College (SGTC) Lady Jets walked away with one win and one loss in the Florida Southwestern Classic women’s basketball tournament in Ft. Myers, FL, recently. The Lady Jets defeated Indian River State College 58-42 in the opening game, but lost to Florida Southwestern in the second match-up, 67-75. The Lady Jets are now 11-2 on the 2016-17 season.
SGTC had climbed as high as number 20 in the National Junior College Athletic Association’s (NJCAA) Division I women’s basketball rankings prior to their loss to Florida Southwestern. The loss dropped the Lady Jets from the top 25 ranking list.
The Lady Jets opened the Florida Southwestern Classic tournament with their win over Indian River State College. In that match-up, La’Deja James earned a double double, tossing in 23 points and pulled down 10 rebounds as well as contributing five assists, four steals, and two blocks.
James was the only Lady Jet in double-figures, but freshman forward, Houlfat Mahouchiza, came close, contributing nine points and nine rebounds. Desiree Corbin, a sophomore transfer forward, added eight points while Camille Coleman and Esther Adenike both tossed in six points.
The Lady Jets led 17-8 at the end of the first period and then continued to build on that lead throughout the 40-minute test.
The Lady Jets failed to continue their winning ways, however, when they dropped a 67-75 decision to Florida Southwestern. The Lady Jets only shot 30 percent from the field and saw 12.5 percent success from the three-point arc. Florida Southwestern shot 44 percent from the field and hit 43.8 percent of their three point shots.
James was the only player in double-figures again for the Lady Jets. James earned another double double in the match, supplying 21 points, 10 rebounds, four assists, three steals, and three blocked shots. Coleman added nine points and Mahouchiza tossed in eight. Sophomore transfer Fluellyn and Corbin added seven and six points, respectively.
The Lady Jets will open their Georgia Collegiate Athletic Association (GCAA) schedule on Dec. 17 when they take on Andrew College in the Hangar on the Americus campus. Tip-off is scheduled for 1:00 p.m.