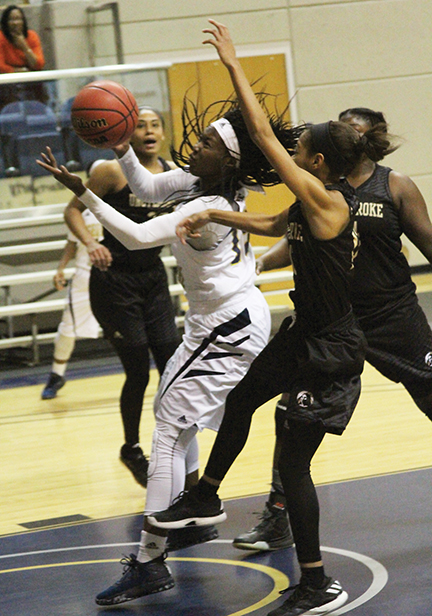 MICHAEL MURRAY/ATR GSW’s Aleah Holden takes a shot from the key during the Lady Hurricanes’ Dec. 19 contest in Americus. Holden recorded her third double double of the season in the team’s test against Francis Marion.

AMERICUS – For the second time in Georgia Southwestern State University (GSW) history the women’s basketball team is 2-0 to start Peach Belt Conference (PBC) play after defeating UNC Pembroke (UNCP) on Dec. 19 in the Storm Dome.
The Lady ‘Canes opened conference play on Dec. 17 with a victory over Francis Marion University (FMU) in Americus.
Following the series of wins, the GSW ladies jump to 7-2 overall and 2-0 in the PBC. The last time the Lady ‘Canes were 2-0 in the PBC was during the 2009-10 season.
In GSW’s contest against Francis Marion, The Lady ‘Canes tied the game twice in the beginning of the second quarter, but fell behind by six points at the 6:32 mark. GSW then rallied to tie it back up within two minutes. Chanice Whitton started it off with two free throws, followed by Brittany Grant with a lay-up and Mallory Diamond evened the score 23-23 with a layup.
Khayla Owens took the lead with another lay-up at the 1:29 mark and Whitney Young laid one up ten seconds later to give GSW a three-point lead. Kya Cochran made two free throws with 17 seconds left and FMU sank a lay-up to trail 33-30 at halftime. 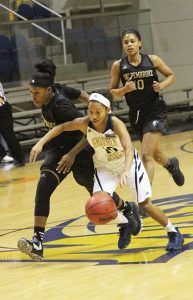 FMU tied the game 41-41 with 5:35 remaining in the third quarter then took a two-point lead. The game was tied five more times in the third quarter until GSW took the lead for good. Grant started if off with two free throws that gave the Lady ‘Canes a one-point lead. Holden made two more free throws and Cochran made one to give GSW a 54-50 advantage with 59 seconds left. GSW headed into the last quarter up 58-52.
GSW went on a seven point run after FMU made the first basket of the fourth. Diamond put in a jump shot, followed by Grant with a three-pointer and two free throws to give GSW a 65-54 lead with 6:44 left.
The Lady ‘Canes kept up the momentum and took a 72-63 win to start off PBC play.
Grant led the Lady ‘Canes with 14 points, Whitton scored 12 and Diamond added nine. Holden recorded her third double double of the season with 10 points and 10 rebounds.
Two days later, the Lady Hurricanes returned to the action in the storm dome to battle UNCP.
The Lady ‘Canes were behind in the first quarter until the 3:45 mark when Figgers made back-to-back three-pointers to tie the game and then take the lead 12-9. Cochran put in a jump shot followed by Diamond with a lay-up to expand the hosts’ lead to seven points. UNCP scored five points in the remaining 31 seconds to trail by two heading into the second quarter.
The game was tied four times in the second quarter and the lead changed four times before GSW took and kept it heading into half-time up 34-27.
UNCP closed in during the third quarter coming within four points of the lead with 2:16 left. Figgers put added a trey to extend the lead to seven and Whitton made a lay-up to give GSW a nine-point gap. By the end of the third quarter GSW was up 51-43.
The Lady ‘Canes kept their lead throughout the fourth and played a tough defense, holding UNCP to 12 points, their least amount in the four quarters.
GSW came out on top to take a 66-55 win and claim their second PBC win.
Figgers led the Lady ‘Canes with 14 points shooting 4-6 from behind the arc Whitton recorded her first double-double of the season with 10 points and 12 rebounds and Holden picked up 12 rebounds.
The Lady Hurricanes are back in action January 5, 2017, as they travel to Augusta, Ga., to play Augusta University at 5:30 p.m.