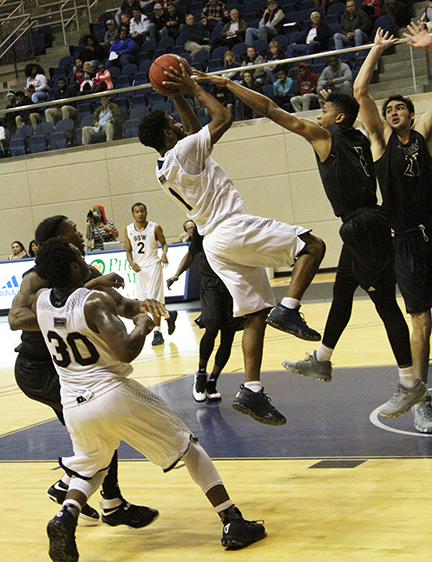 MICHAEL MURRAY I ATR: GSW’s Cameron Dozier (1) taskes a jumper from the lane during the Hurricanes’ Dec. 19 contest in Americus. Dozier scored a game-high 25 points in GSW’s win over Francis Marion.

AMERICUS – Georgia Southwestern State University senior guard, Cameron Dozier, scored a game-high 25 points to lead the Hurricanes past Francis Marion University (FMU), 80-76, on Dec. 17 in the Storm Dome. It was the Peach Belt Conference (PBC) opener for both schools.
The Hurricanes returned to conference action on Dec. 19 to face off against UNC Pembroke (UNCP) in Americus. After a tough battle, the GSW squad suffered a 78-62 defeat despite an admirable 30-point performance from senior guard, Brandon Price, who honed in on the bucket five times from beyond the arc and nailed each of his seven free throw attempts.
The loss snapped a two-game winning streak for the Hurricanes and dropped the team’s overall record to 3-6 overall, 1-1 in the PBC.
In the conference opener against FMU, Dozier picked up where he left off after dropping 30 in the win over Fort Valley State three days earlier. Dozier opened the game with a three-pointer and followed teammate, Devin Watson’s, trey with another conversion from beyond the arc to put GSW on top, 9-5, early in the tilt.
The Hurricanes opened up their first double-digit lead, 24-14, when Price sank a three-pointer at the 13:53 mark of the first half and extended the advantage to a game-high 13 points, 29-16, less than three minutes later with a three-pointer from Tevin Wise.
GSW held off a Patriots run before the break and led, 46-39, at the half.
Rakeem Hicks pushed the Hurricanes lead back to double figures and to their largest lead of the second half, 50-39, when he sank a three-pointer with 18:52 to play.
Francis Marion used a 14-6 run to erase the Hurricanes advantage and tie the game, 61-61, with 10:29 remaining. 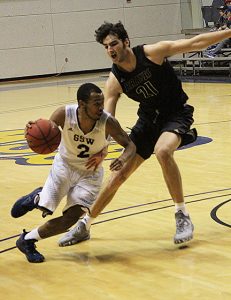 MICHAEL MURRAY I ATR:
GSW’s Brandon Price blazes past a UNC Pembroke defender on Dec. 19 in Americus. Price hit five three-pointers in the tilt on his way to to contributing 30 points to the GSW cause.

GSW scored the next four points when Dozier sank a pair of free throws on the ensuing possession and Jordan Banks added a lay-up to give the Hurricanes a small cushion that they would maintain the rest of the way. GSW sank six of eight free throws down the stretch to seal the victory.
Francis Marion entered the game with the Peach Belt’s largest rebound margin (+8.3) and they maintained that on figure on Saturday by winning the battle on the boards, 38-30. GSW forced the Patriots into seven more turnovers, 18-11, and the Hurricanes knocked down 10 three-pointers for the third consecutive game. Francis Marion felt the biggest sting at the charity stripe where the Patriots missed 18 of 42 free throw attempts.
Watson added 18 points, five rebounds and four assists for GSW. Price scored 12 and Wise scored in double figures for the second straight game, chipping in 10.
The Hurricanes wrapped up their three-game home stand two days later in a conference test against UNCP.
Dozier kicked the action up a notch with a lay-up with 7:50 left in the first half to put the Hurricanes on top, 17-16, for their final lead of the afternoon. UNC Pembroke scored on its next possession and eventually closed out the final 3:38 of the opening session on a 13-3 run to take a 41-28 lead into the halftime break.
The Braves used the first nine minutes of the second half to stretch their lead to a game-high 21 points, 62-41, but Price and the Hurricanes would not go away.
Following a pair of Wise free throws, Price scored 17 consecutive points for GSW to pull within eight, 68-60, with 5:24 to play.
The Hurricanes ran out of gas however, as they missed their next five shots and four free throws to allow UNCP to stretch its lead back to double digits, 74-62, with 2:41 to go.
The Braves entered Monday’s matchup with the Peach Belt’s most steals per game (9.9) and they maintained that figure by taking 10 away from the Hurricanes. The Braves controlled the glass, 42-33, and dished out five more assists than GSW, 15-10. Neither team was strong at the charity stripe as the Braves missed half of their attempts (14 of 28) and GSW missed 9 of 20.
Wise turned in his best offensive effort of the season by scoring 12 points off the bench and grabbing a team-best five rebounds. Dozier added 11 points and matched Wise with five boards.
The Hurricanes are off until Jan. 5, when they travel to Augusta University.

ABT excels at mid-season meet in Atlanta