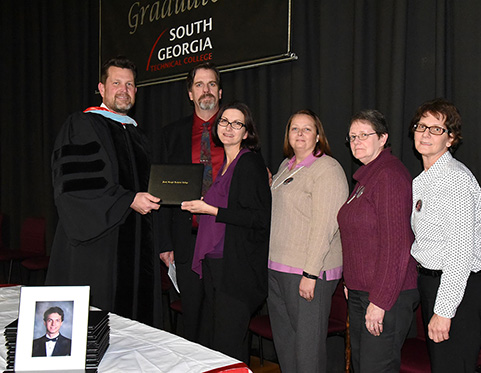 AMERICUS — South Georgia Technical College (SGTC) hosted its 2016 fall commencement ceremony at 6 p.m. Dec. 15 at the James S. Peters Gymnasium on the Americus campus in front of a capacity crowd.
Approximately 250 students, 30 of which were either Presidential Honor or regular Honor graduates, received awards of either an associate degree or a diploma during the 2016 fall commencement ceremony. Students must have an overall grade point average of 3.9 or higher to qualify as a Presidential Honor graduate and a grade point average of 3.70 to 3.89 to qualify as an Honor graduate. National Technical Honor Society members were also recognized. 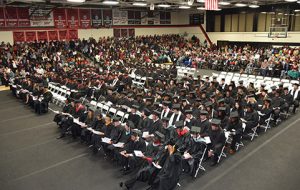 Vice President for Academic Affairs David Kuipers presided over the graduation ceremony and introduced the Rev. Bill Dupree who gave the invocation. SGTC President  John Watford, Ed.D., welcomed graduates and their families and recognized special guests. Janet Siders, chair of the SGTC local board of directors, introduced the keynote speaker for the evening, Andrea Ingram, SGTC 2016 Instructor of the Year who teaches computer information systems for the college.
Ingram challenged graduates to remember that there is a whole world starving for new ideas and innovative leadership; a world full of opportunities and challenges.
“South Georgia Technical College adopted a new slogan this academic year, ‘Making it Happen.’ Graduates, tonight is evidence that you have made it happen here at South Georgia Tech. You have earned your degrees and diplomas, but I hope that you will continue to ‘Make it Happen’,” said Ingram. 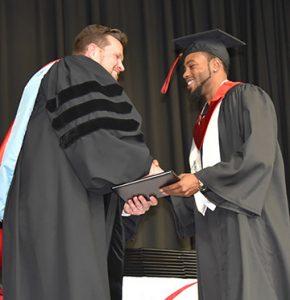 Racarda Blackmon of Americus was presented with his networking specialist associate of applied science degree by President Watford.

The 2016 Instructor of the Year then shared some life lessons including the phrase, “as a man thinketh, so is he,” and challenged them to remember that their thoughts create who you are and who you become. She also encouraged the graduates to live in the moment and celebrate victories, and last but not least, she asked them to “know you why” or the purpose or reason that you are doing what you are doing. “Live the best you in the moment and Make it Happen,” concluded Ingram.
Watford and Kuipers then had a special presentation for the family of Jacob Anderson, a high performance engines-motorsports student who lost his life earlier this semester in an automobile accident. His parents were presented with a motorsports vehicle technology diploma in his memory. Joy Anderson, his mother, accepted the diploma on her son’s behalf. Scott Baker, Beth Anderson, Nance Seifert, and Lorraine Smalley were also present. 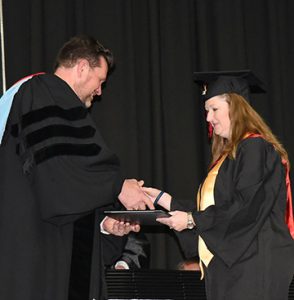 Jamie Campbell of Americus, a Presidential Honor Graduate, earned an associate of applied science degree in accounting. She is shown receiving her diploma from President Watford. 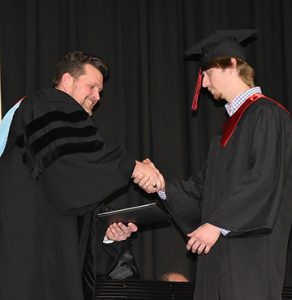