AMERICUS – Members of the Americus Kiwanis and Rotary Clubs celebrated the holiday season northern-style on Dec. 30 at Sumter On Ice in downtown Americus with a friendly broomball competition.
The challenge was issued by Todd Lunneborg, a member of the Kiwanis Club, and the Rotary Club’s members eagerly accepted despite many of the members of both teams having never played the game before.
Broomball is a game, similar to hockey, which grew in popularity through the first half of the twentieth century in Canada and the Northern United States. Though players do not wear ice skates, the game is traditionally played on ice with long sticks capped by plastic fans that resemble brooms.
After a heated match-up between the two teams, the score remained tied 11-11 at the end of their pre-determined regulation play duration.
The victor was determined by a tie-breaker shootout, with the Kiwanis team eventually coming out on top.
Whether or not this match-up will become a tradition in the years to come remains to be seen. Perhaps next winter, members of the local service organizations will try their hand at curling. 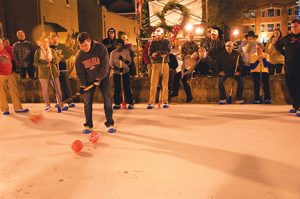 NICOLE BUCHANAN I ATR:
A member of the Kiwanis team winds up to take a shot during the first annual Kiwanis/Rotary broomball competition in downtown Americus on Dec. 30. The Kiwanis Club ended up winning the match-up in an overtime shootout.