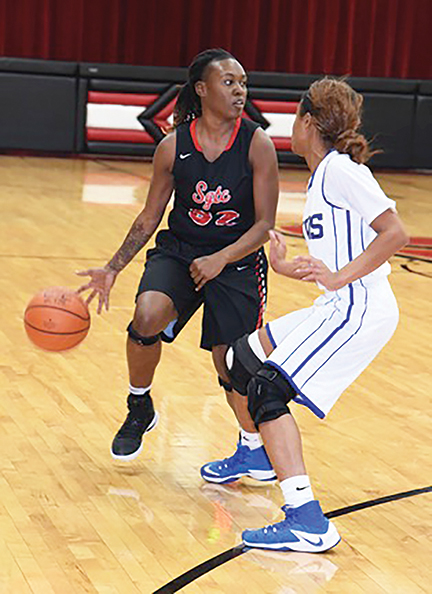 SUBMITTED BY SGTC: Shaineequah Fluellyn (32) earned a start for the Lady Jets against St. Petersburg and led her team in scoring with 22 points.

AMERICUS – The South Georgia Technical College (SGTC) Lady Jets wrapped up the year 2016 with a flourish, hosting the Lady Jets Holiday Classic in Americus on Dec. 29-30. Four teams participated in the event, including the ladies’ squads from Georgia Highlands College, Broward College, St. Petersburg College, and SGTC.
The Lady Jets split decisions in the tournament, bringing the team’s overall record to 13-3 heading into the new year. The Lady Jets are currently 1-0 in Georgia Collegiate Athletic Association (GCAA) play.
The tournament kicked off with a match-up between Georgia Highlands and St. Petersburg on Dec. 29. Georgia Highlands won the tilt 75-69. The Lady Jets then hit the court to take on Broward.
The Lady Jets came out very sluggish after the holiday break and were defeated in a narrow 63-61 decision by the Lady Seahawks.
“We just didn’t show up until the fourth quarter,” said South Georgia Technical College Athletic Director and Lady Jets head coach James Frey. “We didn’t play with intensity for the first 30 minutes and this is what happens when you play good teams. Despite that, we still had a chance to win at the buzzer and just didn’t pull it off.” 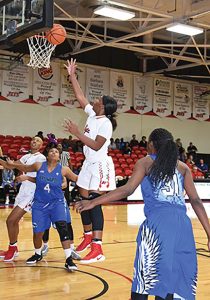 SUBMITTED BY SGTC:
La’Deja James was the top scorer for the Lady Jets with 15 points in the LAdy Jets’ tournament opener against Broward College. Seven of James’ points were from the foul line. James hit seven of seven shots from the free throw line.

The Lady Jets did not even score in the first six minutes of the game and were down 12-0 before they came back and cut the deficit to 14-5 at the end of the first quarter. The Lady Jets managed to cut Broward’s lead to 24-19 at the half, but still looked sluggish.
A strong effort by the bench in the third quarter allowed the Lady Jets to close the gap to within four points, but Broward came back to pull ahead 44-33 as the teams headed into the final quarter.
The Lady Jets finally came alive in the fourth frame and outscored Broward College 28-19 before falling 63-61. “We were in the game and had a chance to win even after Broward went up by two points with 1.4 seconds remaining,” said Frey.  “Now we have to regroup and get ready for St. Petersburg College and our conference games.”
Sophomore, La’Deja James, was the top scorer for the Lady Jets with 15 points and sophomore transfer forward, Desiree Corbin, was the only other Lady Jet in double figures with 14 points. James contributed nine rebounds and two assists while Corbin pulled in 10 rebounds and blocked one shot.
Esther Adenike and Shaineequah Fluellyn both came off the bench for the Lady Jets and added seven points. Adenike also had 13 rebounds. Madison Cameron, a sophomore transfer, came off the bench and hit two three-point shots to wind up with six points on the night. Another reserve, Trakyra Kidd added five points and four rebounds.
The Lady Jets bounced back after the disappointing loss to Broward College to overpower the St. Petersburg College Lady Titans 78-57 and move to 13-3 on the season.
“We played with much more intensity,” said Frey. “We took control of the rebounds and made our layups. When you do those two things and limit turnovers, you should win.”
Broward College was the overall winner of the Lady Jets Holiday Classic. They defeated Georgia Highlands College 65-57 in the opener on Friday to move to 2-0 in the tournament. Both Georgia Highlands and South Georgia Tech ended the tournament at 1-1 while St. Petersburg finished 0-2.
Frey made a change to his starting line-up in the St. Petersburg match-up. Fluellyn, along with Kidd and Adenike started alongside James and Corbin. That change proved to give the team the results it needed against the Lady Titans.
Fluellyn wound up leading the Lady Jets in scoring with 22 points; her career-high at South Georgia Tech. James added 13 points and Kidd closed out the double-digit scoring with 10 points.
Camille Coleman contributed nine points and Houlfat Mahouchiza added another eight.  Adenike scored six points and Kanna Suzuki contributed five points.
SGTC will take a hard-earned break until Jan. 7, when the Jets and Lady Jets host a conference double-header against Central Georgia Tech. The games will begin at 1:00 p.m. and 3:00 p.m. A double-header against Chattahoochee Tech on Jan. 4 had to be rescheduled until later in January.