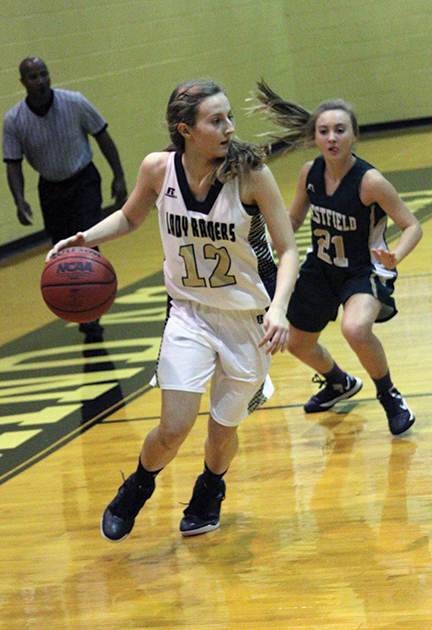 MICHAEL MURRAY I ATR: Southland’s Sydney Payne drives down the court during the Lady Raiders’ Jan. 3 tilt against Westfield. Payne scored six points for the home team in the first frame to keep the Lady Raiders in contention for the win.

AMERICUS – Southland Academy guard, Kathleen Kinslow, and forward, Savannah Banks, burned up the court on Jan. 3 in the Lady Raiders’ home tilt against the Westfield Lady Hornets. Both Kinslow and Payne scored double figures with 10 points apiece in Southland’s non-region victory over Westfield, leading their team to a 36-35 comeback victory.
With the win, the Lady Raiders jump to 9-3 overall on the 2016-17 season.
The match-up got off to a slow start, with the visitors throwing four points on the board before the Lady Raiders broke their silence when Sydney Payne nabbed a steal and made a fast break for a lay-up. Payne added a pair of shots from the foul line before repeating her steal/fast break lay-up performance two minutes later to bring the Southland ladies within one point at 7-6 before the beginning of the second frame. 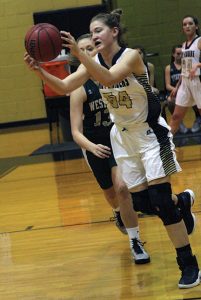 Southland guard, Cassi Bass, put the Lady Raiders back into the black with a three-pointer to open up the second quarter. Moments later, a Lady Hornet sharpshooter answered with a trey of her own to retake the lead. Kendall Kirkland followed with a Bass-assisted jumper which was echoed moments later by Kinslow to give the hosts a 13-10 lead halfway through the second stanza.
The Lady Raiders continued to pull away, eventually earning a 19-13 lead. Macy Williams contributed a block just before the buzzer to help the Lady Raiders preserve their 19-15 lead at the half.
Bass, once again, opened the action with a jumper when play resumed, followed by another tossed in by Kinslow from the wing.
Despite the Lady Raiders’ best defensive efforts, however, the Westfield crew slowly fought their way back into contention, pulling within two at 28-26 when the buzzer sounded, signaling the start of the final quarter.
With a free throw and a pair of lay-ups, the visitors quickly took the lead in the fourth stanza, but Kinslow deftly evened the score (31-31) with a three-pointer from the center.
By the 1:45 mark, the Lady Hornets had pulled ahead 35-31. Kinslow added a free throw one minute later before Payne assisted Banks in a lay-up to bring the home team within one. With the Lady Raiders down 35-34, Kinslow nabbed her final steal of the game and took a shot. The shot bounced off the rim and fell into the arms of a leaping Banks, who converted the rebound to the abundant cheers of the home crowd, solidifying the 36-35 win for Southland.
Kinslow added a pair of steals for the Lady Raider cause in addition to her 10 points in the contest.
Payne tossed in six points to accompany her two steals and two assists while Bass dished out three assists alongside her five points. Banks and Williams each contributed one block.
The Lady Raiders will host the Crisp Academy Lady Wildcats on Jan. 6 at 6:00 in Americus. The team will extend their home stand on Jan. 7, hosting the Glenwood Lady Gators at 4:30.