ASHS Lady Panthers breeze past Cairo to improve to 12-2 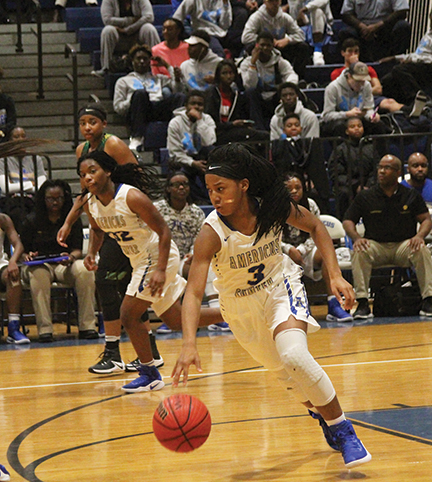 MICHAEL MURRAY I ATR: ASHS’ Jykiera Long (3) drives the ball down the court while while Shidajah Johnson (32) provides backup in the background during a late December contest in Americus. Long contributed 13 points to the ASHS victory in Cairo while Johnson tossed in eight.

CAIRO – The Americus-Sumter High School Lady Panthers made short work of the Cairo High School Lady Syrupmakers on Jan. 3 in Cairo, pulling ahead early thanks, in part, to a 30-point effort from senior forward, Timia Swanson. The Lady Panthers hung on tightly to their lead to earn a 64-46 Region 1-AAAA victory over their old rivals.
With the win, the Lady Panthers jump to 12-2 overall on the 2016-17 season and 2-1 in Region 1-AAAA.
The Lady Panthers got the jump on their hosts early, outscoring Cairo 15-12 in the initial quarter. The ASHS ladies practically put the game away in the second frame, adding another 14 marks to their tally while holding their foes to only five to take a 29-17 lead into the second half.
ASHS continued the onslaught in the third frame, outscoring the Lady Syrupmakers 18-13 before adding another point to their advantage in the final stanza with a 17-16 eight-minute battle.
It was a big night for Swanson, who hit eight of 11 free throws and shot 55 percent from the floor on her way to 30 points for the ASHS cause. Swanson also earned double double honors with 13 rebounds in addition to five steals, three assists, and two blocked shots.
Junior guard, Jykiera Long, joined Swanson in the double-digit club with 13 points scored in the match-up to accompany her three assists and four steals. Junior guard, Shidajah Johnson, added another eight points to the win and led the team in assists with seven. Freshman forward, Brianna Pope, added another seven points to the win.
The Lady Panthers took a week-long break before returning to action on Jan. 10 at the Panther Den in Americus, where they faced on the Northside High School Patriots. The results of this contest were not available at press time.
The ASHS ladies will hit the road for Columbus on Jan. 13, where they will continue Region 1-AAAA action against the Carver High School Lady Tigers. The following evening, the ASHS ladies will return to Americus to test their skills against old rivals, the Westover Lady Patriots.