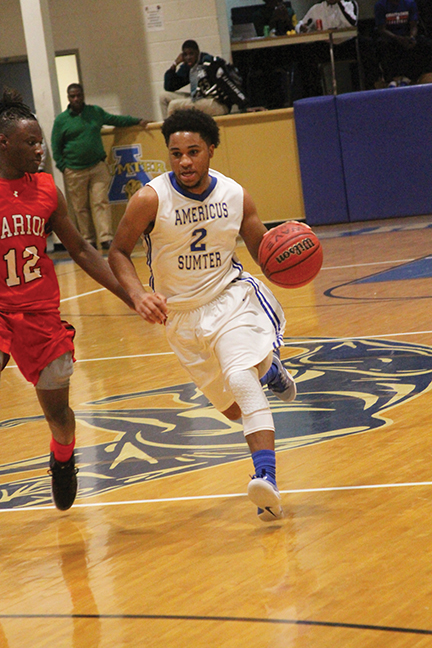 MICHAEL MURRAY I ATR: ASHS’ Malik Jackson barrels down the court during a late December contest in Americus. Jackson contributed three steals to the Panthers’ Jan. 3 win over the Cairo High School Syrupmakers.

CAIRO – The Americus-Sumter High School Panthers continued their Region 1-AAAA winning streak on Jan. 3, when the team headed to Cairo to battle the Cairo High School Syrupmakers. The ASHS boys pulled ahead early and continued to guard their early lead through the test to earn an 80-44 victory.
With the victory, the Panthers remain undefeated in Region 1-AAAA competition after three contests while their overall record jumped to 11-3.
ASHS got off to a very strong start in the match-up, outscoring their hosts 20-11 over the first eight minutes of play. The Panthers continued to dominate the court in the second stanza, adding another 24 points to their first-half tally while holding the Syrupmakers to only eight.
With a 44-17 lead heading into half-time, the Panthers were in position to continue the runaway victory when play resumed, and that’s exactly what the Americus team did. ASHS expanded the gap by another 11 points in the second half to cinch the 44-point win at the final buzzer.
ASHS senior, Kiante Sims, set the pace for the visitors in the win, landing six of seven shots from the field and one from the charity stripe to contribute 13 points. Sims also dished out a trio of assists and nabbed one steal in the tilt.
Sh’Qual White connected on six of eight goals to add another 12 points and three rebounds to the win.
Jurrell Jones joined Sims and White in the double-digit club, nailing five of six attempts from the floor on his way to 11 total points. Jones also contributed three rebounds and one assist to the victory.
Eric Hall dialed in from downtown twice in the match, hitting two of three long-range attempts on his way to eight points total. Hall led the team in assists alongside Stephon Luster. Each player dished out four.
Karmil Hamilton led the team in steals with four, followed closely by Malik Jackson, who snagged three. Joshua Moore blocked one shot for the Panthers.
The ASHS boys returned to action on Jan. 10 to continue region competition against Northside High School of Columbus after nearly three weeks on the road. The results of this contest were not available at press time. The Panthers will head to Columbus on Jan. 13 to battle Carver High School before returning to their home court the following evening to face the Westover Patriots.