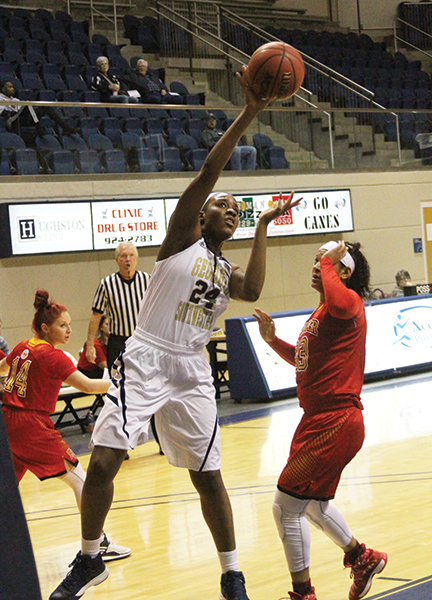 MICHAEL MURRAY I ATR: GSW’s Chanice Whitton tosses up a jumper during the first quarter of the Lady Hurricanes’ Jan. 9 tilt against Flagler College. Whitton scored a career-high 16 points in the contest, leading the Lady ‘Canes to victory..

AMERICUS – Chanice Whitton scored a career-high 16 points to lead the Georgia Southwestern State University (GSW) women’s basketball team to a 85-63 win over Flagler College on Jan. 9 in the Storm Dome.
GSW improved to 9-3 overall and 4-1 in the Peach Belt Conference, their best PBC start, while Flagler College moved to 2-10, 0-5 PBC.
The Lady ‘Canes went on a 13-point run to take an 11-point lead with 6:42 remaining in the first quarter. Brittany Grant started it off with a jump shot before Kris Beckham put in two free throws. Shanya Jones tossed in a lay-up before Grant drained a three-pointer and Whitton made two lay-ups to finish off the sprint.
Flagler was able to close in on the lead by five points at the end of the first and tied the game 20-20 two minutes into the second quarter.
Whitton put in a jump shot and a lay-up to give GSW four-point lead. Flagler promptly put in a three-pointer of their own to trail by one. Beckham followed with a trey and a lay-up to take a six-point lead with five minutes remaining.
Two minutes later, GSW expanded their edge to 10 points after Va’Queshia Hall added a lay-up and a pair of free throws, followed by Kya Cochran with a jump shot.
After Flagler added two more to their tally, Figgers drained a shot from downtown and Aleah Holden added a lay-up to head into halftime up 42-29.
Despite scoring 22 points in the third quarter, Flagler entered the last quarter down 65-51.
The Lady ‘Canes kept up their momentum and held Flager to just 12 points in the fourth stanza. GSW took their largest lead of 25 points with 22 seconds left, but Flagler made a last-ditch three-pointer in the final 11 seconds to fall by 22.
For the third time this season, Figgers scored 14 points coming in off the bench. Hall recorded 12 points and Whitton picked up nine rebounds.
The Lady Hurricanes are on the road on Jan. 11 to play PBC foe, Montevallo, at 6:30 p.m.