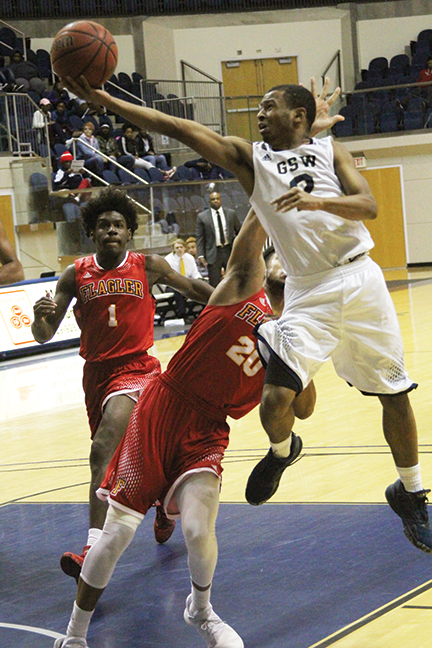 MICHAEL MURRAY I ATR: GSW’s Brandon Price lets a lay-up roll off of his fingertips after juking past a Flagler defender during the first half of the Hurricanes’ Jan. 9 match-up against the Saints. Price added 19 points and seven assists to the GSW victory in the Storm Dome in Americus.

AMERICUS – Following a tough stint on the road, the Georgia Southwestern State University (GSW) men’s basketball team broke a three-game skid upon returning to the Storm Dome on Jan. 9 to battle Flagler College.
GSW Junior guard, Tevin Wise, sank five of 10 shots from beyond the arc in the Storm Dome en route to a game-high 23 points to lead the Hurricanes past Flagler, 84-74, in Peach Belt Conference action.
GSW improved its record to 4-2 at home, 4-8 overall and 2-3 in the PBC, while Flagler saw its mark dip to 6-5, 1-4 in conference play. With the win, the Hurricanes evened the all-time series record against Flagler during GSW’s NCAA era to 5-5.
Trailing 7-4 in the early going, Devin Watson proceeded to knock down a trey that sparked a 24-5 run for GSW that was capped by 11 of the final 14 points coming from Wise.
The Hurricanes led 40-29 at the half.

MICHAEL MURRAY I ATR:
GSW’s Tevin Wise tosses up one of his five connections from long range during the Hurricanes’ Jan. 9 tilt against Flagler. Wise contributed 23 points to the GSW win.

It took nearly four minutes for GSW to score its first points of the second period, but Flagler had been quiet too, managing only three points during that stretch.
Brandon Price sandwiched a trey between a pair of three-point buckets from Wise to help the Hurricanes stretch their lead to 57-40 with 11:58 remaining.
GSW looked to be cruising to the win, leading by 18 with 6:01 to go, until the Saints sank treys on three consecutive trips down the floor in the midst of a 14-6 run to pull within nine with 2:49 on the clock.
Watson found Cameron Clayton under the hoop for a quick lay-up with 1:09 remaining and the Hurricanes followed with four consecutive free throws in the final minute to seal the victory.
Flagler entered the game ranked second in the PBC for holding opponents to the lowest three-point shooting percentage (30.4 percent), but GSW paid no mind, finishing the game 10 of 22 from long range (45.5 percent). The Saints also ranked second in rebounding, but GSW won the battle on the boards for only the third time this season and kept Flagler 16 rebounds below their average. The Hurricanes dished out six more assists, 20-14, and had more bench points than their opponent for only the second time in 12 games.
Clayton provided the spark off the bench as he added 16 points behind eight of 12 shooting and eight rebounds. Price tossed in 19 points and dished out seven assists while Watson sank all six of his free throw attempts on his way to 13 points.
Flagler was led by Cortlin Davis with 21 points. Jeffercy Jean scored 15 and Vaughn McCall chipped in 14. Chris Williams pulled down a game-high 10 rebounds.
The Hurricanes hit the road for a three-game trip that starts 8:30 p.m. on Jan. 11 at Montevallo.