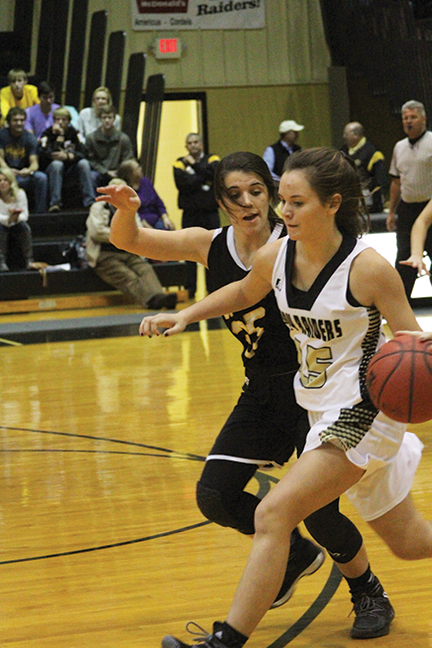 MICHAEL MURRAY I ATR: Southland’s Sydney Hayes drives down the court during the Lady Raiders’ Jan. 6 tilt against the Crisp Academy Lady Wildcats in Americus.

AMERICUS – The Southland Academy Lady Raiders added another non-region win to their total on Jan. 6 against the Crisp Academy Wildcats in Americus. The Lady Raiders returned to the court the following evening to take on the Glenwood School Lady Gators, suffering their first loss of 2017, 55-37.
Following this pair of match-ups, the Lady Raiders’ overall record slid to 10-4.
In Friday’s test, the Lady Wildcats opened the scoring early in the first quarter, but Southland quickly negated the threat when Savannah Banks converted a rebound. Macy Williams followed with a block and a steal before tossing the ball over to Kathleen Kinslow, who drove in for a lay-up. Kendall Kirkland capped off the initial quarter with a pair of shots from the foul line to give the Lady Raiders a 6-3 lead heading into the second quarter.
Crisp Academy made their move early in the second frame, taking an 8-6 lead with a pair of lay-ups and a free throw before Kirkland broke their momentum with a steal. With four minutes left to play in the half, Calyn Fort tied the score 8-8 with a Kinslow-assisted jumper. Kinslow and Williams each added points from the charity stripe before Sydney Payne followed a steal with a fast break, widening the gap to 12-9 moments before the buzzer sounded, signaling the intermission. 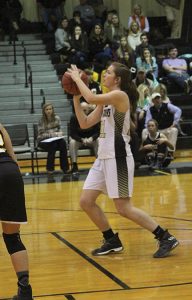 MICHAE MURRAY I ATR:
Southland freshman, Macy Williams, sizes up a shot from the charity stripe during the Lady Raiders’ Jan. 6 tilt against the Crisp Academy Lady Wildcats in Americus.

When play resumed, the Lady Raiders took off on a 12-4 run in the third frame, highlighted by a lane drive from Payne, a long trey from Kinslow, and a Cassi Bass-assisted jumper from Sydney Hayes.
The home squad continued their progress in the final stanza, with Payne and Williams each contributing blocks to hinder the visitors’ attempt to come back. By the final buzzer, the Lady Raiders had earned the 10-point victory.
Kinslow set the pace for the team in the tilt, tossing in 10 points while dishing out two assists and grabbing one steal. Payne followed with seven points contributed to the win as she made her presence known on the court by contributing five steals, one block, and one assist.
Kirkland added another three steals to the Lady Raiders’ tally while Williams followed with a pair of blocks and two steals.
The details of the Lady Raiders’ Jan. 7 tilt against Glenwood were not available at press time.
The Lady Raiders returned to action in Dawson on Jan. 10, taking on Terrell Academy. The results of this contest were not available at press time.
Southland’s girls will return to their home court on Jan. 13 to open Region 3-IAAA competition against the Tiftarea Lady Panthers at 6:30.