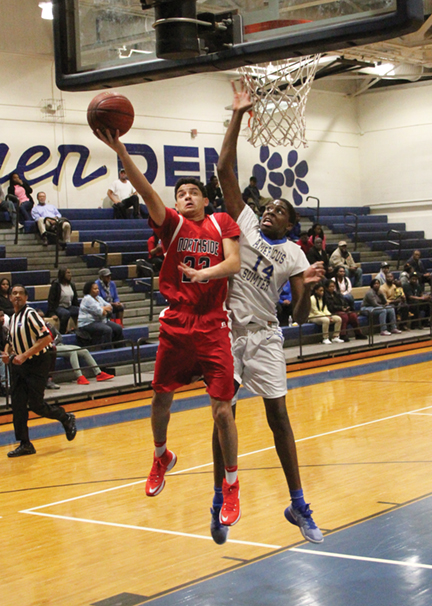 MICHAEL MURRAY I ATR: ASHS’ Joshua Lusane leaps up to defend the goal as an NHS opponent attempts a lay-up on Jan. 10 in Americus. Lusane added 11 points to the ASHS win.

AMERICUS – The Americus-Sumter High School (ASHS) Panthers basketball team had their work cut out for them on Jan. 10 in the Panther Den in Americus, where the team hosted newcomers to Region 1-AAAA, the Northside High School (NHS) Patriots, of Columbus. Following a fiercely competitive first half, the ASHS crew steadily pulled away in the third quarter of the game, only to have the Patriots make a strong push to get back into contention partway through the final frame. The Panthers persevered, however, eventually earning the 63-59 win.
With the victory, the Panthers improve their overall record to 12-3 while remaining undefeated in Region 1-AAAA play after four games.
The Panthers had previously seen the Patriots on the hardwood twice this season; once in a preseason scrimmage, and again in mid-December in Columbus. The Panthers defeated the Patriots in their first two meetings of the year, 80-46 in their initial match-up and 67-63 on the road in December.

MICHAEL MURRAY I ATR:
ASHS senior, Eric Hall, drives past an NHS defender during the Panthers’ Jan. 10 match-up against the Patriots in Americus. Hall led the team with 16 points in the win.

This time around, however, the Northside crew looked like a much scrappier and more competitive team than the squad that came to Americus to size up the competition in November. This elevated level of play forced the Panthers to step up their game and deliver the kind of performance that ASHS fans have come to expect from the school’s cagers.
NHS took first possession and wasted no time tossing in the first bucket. ASHS’ Jurrell Jones, who would go on to a 15-point performance in the tilt, followed with a steal that he converted into a fast-break basket. NHS followed with a trey and a lay-up to pull back ahead.
The Panthers’ next two buckets would come from Jones as well, with the aid of a pair of assists from Eric Hall. Hall soon mirrored Jones’ steal/fast-break combo to bring the Panthers within one point (9-8) and the score remained tight for the next two minutes. As the teams traded jabs, the home crowd was kept cheering by a powerful dunk from Kiante Sims and a driving basket from Joshua Lusane.
The Panthers finally pulled ahead at the 1:40 mark when Lusane dished out an assist to Hall, waiting just beyond the arc to toss up a three-pointer and give the hosts a 15-13 edge.
NSH quickly evened the score before Hall put the Panthers ahead with a pair of shots from the charity stripe and followed a Sh’qual White steal by assisting Lusane in a lay-up to give the Panthers a 19-15 lead at the first buzzer. 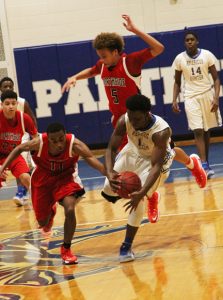 MICHAEL MURRAY I ATR:
ASHS’ Jurrell Jones scrambles for a loose ball during the Panthers’ Jan. 10 tilt against NHS in Americus. Jones tossed in 15 points in the Panther win.

The second period proved just as exciting as the Panthers carefully guarded their lead over eight minutes of play, highlighted by a Sims-assisted trey from Lusane, another converted steal from Hall, and a block from Zyrieck Allen. Sims capped off the frame with a fast break lay-up to put the hosts up 29-23 as the teams hit the locker room for the half-time break.
The action continued in the third stanza as the Panthers utilized three-pointers from A’jerrian Banks and Stephon Luster to expand the gap to 11 points (44-33).
Early in the final stanza, the Panthers saw their largest lead of the match (48-35) when Sims broke away for another dunk and Hall followed with two shots from the foul line.
Near the midpoint of the fourth quarter, however, the Patriots fired up their offense and sparked a 19-7 run that brought the visitors within one point, 55-54, with two minutes left to play. Not to be outdone, the Panthers responded with Sims’ final two dunks of the game and a series of foul shots from Hall and Jones to hang onto their lead at 63-56 until the final seconds of the game. With mere moments left on the clock, an NHS shooter connected on a long three-pointer to narrow the gap to 63-59 as the buzzer signaled the game’s end.
Hall set the pace for the team in the win, tossing up 16 points alongside four rebounds, two assists, and two steals. Jones followed closely, contributing three steals, three rebounds, and two blocks to accompany his 15 points. Sims added another 13 points to the Panthers’ total as well as four rebounds, one assist, and three steals. Lusane was the final Panther team member to score double digits in the match, contributing 11. Lusane also contributed four rebounds, three assists, and two steals.
The Panthers returned to action on Jan. 13, traveling to Columbus to battle the Carver High School Tigers. The results of this game were not available at press time.
The team will return to Americus on Jan. 14, testing their skills against the Westover Patriots, of Albany, at the Panther Den.