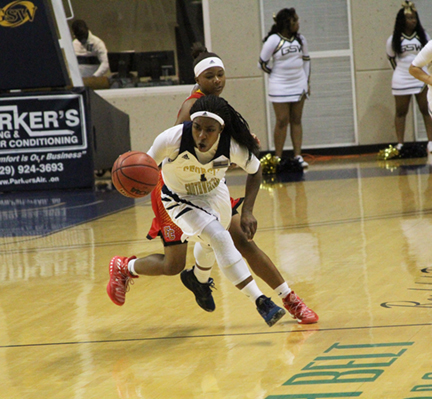 MICHAEL MURRAY I ATR: GSW’s Shanya Jones makes a break for the bucket during the Lady Hurricanes’ Jan. 9 contest in Americus. Jones tossed in lay-up two days later in GSW’s road contest against Montevallo to give the Lady Hurricanes their first lead of the game.

MONTEVALLO, Ala.- The Georgia Southwestern State University (GSW) women’s basketball team picked up their 10th win of the season after defeating the University of Montevallo 71-66 on Jan. 11 in Trustmark Arena.
GSW is now 10-3 overall and 5-1 in the Peach Belt Conference (PBC) while Montevallo moved to 3-10, 0-6 in the PBC.
The Lady ‘Canes were down to start but a seven-point run put them ahead by three with 6:34 to go in the first quarter. Aleah Holden started it off with a free throw, followed by Chanice Whitton with a jump shot. Holden and Shanya Jones then both tossed in lay-ups to give GSW the advantage.
The lead changed five more times in the first quarter before Va’Queshia Hall put in a jump shot with two seconds left to give GSW a 17-16 lead heading into the second quarter.
Gabby Figgers started off the second stanza with a three-pointer and Hall tossed up another jumper to give GSW a six-point advantage. Montevallo then went on an eight-point binge to take a one-point lead with 5:36 left in the half.
Whitton followed an old-fashioned trey with a lay-up and free throw to start the Lady ‘Canes eleven-point come back. Kris Beckham tossed up a jumper prior to Whitton making another lay-up. Khayla Owens drained a jump shot and Beckham finished it with another jumper.
Montevallo came within six points of the lead and headed into halftime down 38-32.
The Lady ‘Canes held the lead for most of the third quarter, but Montevallo out-scored GSW 26-17 and led 58-55 heading into the final frame.
GSW slowly caught up and took a one-point lead at the 5:14 mark after Beckham put in another long-ranger. Figgers, Owens, and Jones extended the lead to five points with 22 seconds left. Montevallo came within three points, but Brittany Grant put the game away with a pair from the foul line to give GSW a five-point win.
Whitton led GSW with 15 points and eight rebounds. Beckham scored 13 points. Hall tossed up 11 and Owens picked up eight rebounds.
The Lady Hurricanes are on the road on Jan. 14 to play PBC foe, USC Aiken, in a conference game at 1:30 p.m.