Panthers slide to 13-4 after weekend matches 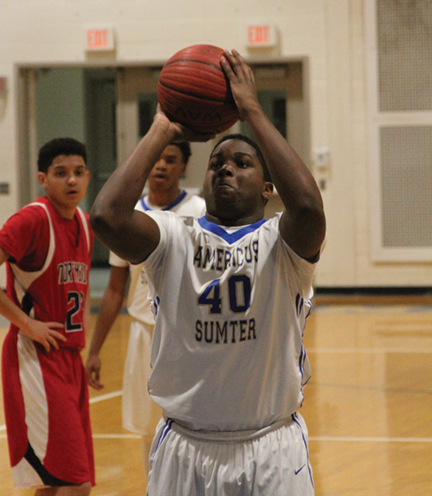 MICHAEL MURRAY I ATR: ASHS’ Sh’Qual White lines up a free throw during a Jan. 10 match-up in Americus.

The Americus-Sumter High School (ASHS) Panthers saw their first defeat of 2017 on Jan. 13 after traveling to Columbus to battle the Carver High School Tigers. Following a hard-fought battle, in which the Panthers had held the advantage for most of the match, the visitors eventually succumbed to a final-quarter push by the hosts to take a 60-56 defeat.
The Panthers returned to their home court the following evening to make up for lost ground with a 68-56 defeat of the Westover Patriots.
Following these matches, the Panthers’ overall record jumps to 13-4 on the season. The team’s Region 1-AAAA record slides to 5-1.
The Panthers got off to a strong start in the Carver match-up, outscoring their hosts 19-12 in the first frame. The ASHS crew matched the Tigers point for point in the second stanza to take a 33-26 lead into the second half.
The Panthers added another point to their edge in the third quarter, outscoring their foes 17-16 before the Tigers sparked a rally in the final period to outscore the Panthers 18-6, which proved enough to overcome the gap and cinch the win.
ASHS’ Eric Hall set the pace for the Panthers in the match-up, tossing in 15 points while dishing out three assists and nabbing two steals. Jurrell Jones followed closely with 13 points, a team-high seven rebounds, one block, three assists, and one steal. Joshua Lusane joined his teammates in double digits with 10 points scored, one assist, and one steal.
Stephon Luster led the team in assists with five while Lusane dialed in from downtown twice to lead the team from long range.
Zyrieck Allen added eight points.
On the following day in Americus, the Panthers duked it out with longtime rivals, the Westover Patriots. The ASHS squad pulled ahead early to take a 42-25 lead into the half-time. The Patriots added another 25 points to their tally while holding the Panthers to only 18 in the second half, but their late surge failed to overcome the gap and the Panthers earned the 68-56 victory.
For the third straight game, Hall led the Panthers’ shooters, adding 15 points by way of a pair of treys. Hall also led the Panthers in assists, dishing out five.
Kiante Sims followed closely with 14 points and led the team’s rebounders with six boards.
Allen, again, tossed in eight points for the Panther cause.
The Panthers returned to action on Jan. 17, traveling to Columbus to take on Shaw High School. The results of this contest were not available at press time. The ASHS boys will return to the Panther Den on Jan. 21 to attempt to even the score against the Carver Tigers.