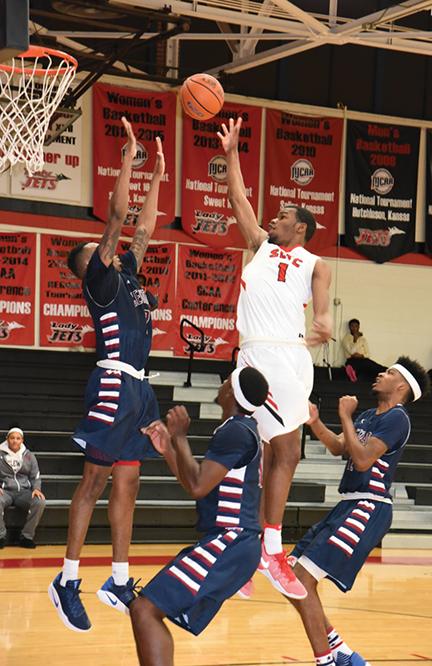 SWAINSBORO – The South Georgia Technical College (SGTC) Jets and Lady Jets both captured Georgia Collegiate Athletic Association victories when they traveled to Swainsboro, Ga. to defeat East Georgia College on Jan. 11. The Lady Jets moved to 3-0 and first place in the conference with their 63-59 victory and the Jets posted a 65-59 win to move to 1-1 in the conference and 7-9 overall.
The Lady Jets were led in scoring by sophomore guard, La’Deja James, with 20 points. Freshman forward, Esther Adenike, was the only other player in double-digits with 13 points and 10 rebounds. Freshman guard, Trakyra Kidd, and sophomore guard, Camille Coleman, both added eight points. Shaineequah Fluellyn and Kanna Suzuki both tossed in five points while Desiree Corbin added four points and 11 rebounds. 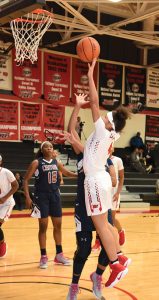 The Jets followed the Lady Jets example and found a way to win in the second match-up. “We didn’t make shots that we normally make but I was very proud of our effort and it was good to see up fight through some adversity,” said Jets head coach, Travis Garrett, who added, “I was happy to get the win.”
Earlier in the week, the lady Jets had captured an 87-70 win over the Central Georgia Tech Lady Titans, but the Jets lost the 94-71 conference match-up.
Coleman led the Lady Jets in that game with 21 points and seven rebounds. James added 15 points and Suzuki scored 14 points to close out the double-digit scoring.
In the men’s contest against Central Georgia Tech, Andre Kennedy led the team with 15 points and was followed by Jalen Thomas and Ed Jones with 14 points each. Tre’Von Teague was the only other Jet in double-figures with 13 points.
Both the Lady Jets and the Jets travel to Rome to play Georgia Highlands on Jan. 18 for another conference double-header. The Lady Jets open at 2:00 p.m. and the Jets will play at 4:00 p.m. The Georgia Highlands men are tied for first place in the conference with Central Georgia Tech at 3-0 and South Georgia Tech is tied for third with a 1-1 record.
The Lady Jets are currently in first place with a 3-0 record but Georgia Highlands is in a close second place with a 2-0 record.