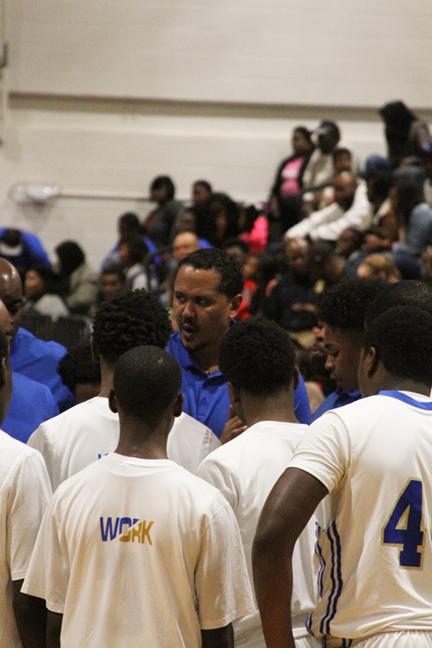 The Americus-Sumter High School (ASHS) Lady Panthers devastated longtime rivals, the Westover Lady Patriots this past weekend. On Jan. 14, the ASHS ladies hosted their Albany foes, earning a 77-29 victory in their Region 1-AAAA match-up.
The Lady Panthers continued their winning ways on Jan. 17, traveling to Columbus to take on Shaw High School. ASHS gained another significant victory in that tilt with a 60-36 thrashing of the Lady Raiders.
Meanwhile, the Panthers added another win to their stats with a 62-50 victory over the Shaw Raiders on Jan. 17 to follow their Jan. 14 win over Westover.
With these victories under their belts, the Lady Panthers’ overall record jumps to 15-3. The team is currently 5-3 in Region 1-AAAA competition.
The Panthers saw their stats improve to 14-4 overall and 5-1 in region play.
The ASHS ladies got the jump on the Lady Patriots early in their Jan. 13 tilt, running away with 24 points in the first frame while holding their foes to only eight. Before the half-time break, the Lady Panthers added another 19 to their first-half tally while Westover had their most productive period of the game, scoring 10 points.
The second half saw much of the same, with the Lady Panthers expanding their lead by 22 points as they outscored their guests 26-4. ASHS added eight more points in the fourth quarter while Westover tacked on seven final marks to cede the 48-point win to ASHS.
Timia Swanson took off for a 24-point game in the match-up to lead the Americus team. Jykiera Long followed closely with 22 points. Zari Mays joined her teammates in double digits, tossing in 12 points.
Swanson earned herself a double double in the test, bringing down 10 rebounds to accompany her 24 points. Swanson also snagged a team-high six steals and dished out four assists.
Mays came down with an additional five boards and blocked two shots. Long assisted on three shots and stole five times.
Shidajah Johnson added another six steals and five assists. 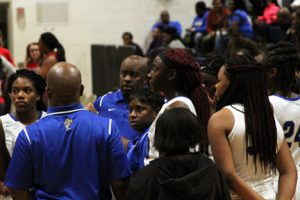 MICHAEL MURRAY I ATR:
ASHS LAdy Panthers head coach, Sherri Harris, addresses the team and members of the coaching staff during a time out in the second half of a mid-January match-up in Americus.

Three days later, the Lady Panthers returned home to deal a 60-36 blow to the Shaw Lady Raiders. The details of this contest were not available at press time.
The Panthers got off to a blazing start in their match-up against Shaw as well, outscoring their guests 18-12 in the initial frame. The ASHS boys continued to pull away before the half-time break, adding 20 points to their total and holding their opponents to only 13.
The Raiders saw their most productive stanza of the contest in the third when the visitors posted 16 points and stepped up their defensive play to stifle the Panthers’ scoring spree at 10 points. Not to be outdone, the ASHS crew returned the favor in the final stanza, tossing 14 marks on the board while holding the Raiders to only nine to cinch the 12-point win.
ASHS’ Kiante Sims set the bar high for his teammates with a game-high 25 points contributed for the Panther cause. Sims also led the Panthers on the glass with six rebounds.
Jurrell Jones joined Sims in double digits with 10 points, followed closely by Eric Hall, who tossed nine on the board. Hall and Jones each brought down four rebounds.
Eric Brown led the team in assists with five, followed by Stephon Luster, who dished out four. Karmil Hamilton led the team in steals with three.
Jones and Zyriech Allen each blocked one shot.
Both the Panthers and Lady Panthers will enjoy a two-game stint on their home court, taking on Carver High School on Jan. 21 and Cairo High on Jan. 24 at the Panther Den in Americus. The ASHS teams will hit the road again on Jan. 27, traveling to Columbus to battle Hardaway High School.