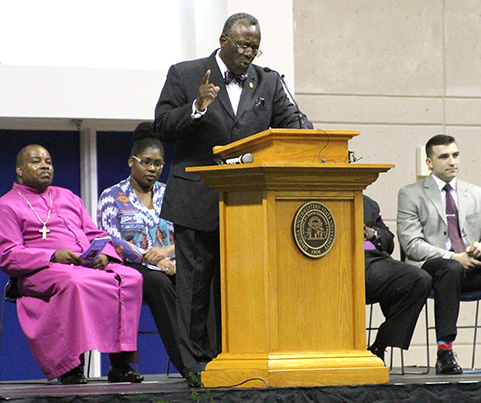 AMERICUS – Georgia Southwestern State University (GSW) held the institution’s 37th annual commemoration ceremony in honor of the Rev. Martin Luther King Jr. Wednesday at the Convocation Hall on the GSW campus.
The ceremony included a series of musical and dance performances from GSW alumni, current students, and members of the Americus-Sumter High School (ASHS) Gospel Choir, as well as speeches from several influential local speakers as well as speakers from outside the community.
Bryce Benton, president of the GSW Student Government Association, opened the ceremony before turning over the podium to Vice President of Academic Affairs, Brian Adler, Ph.D., who welcomed the crowd of over 150 local students and residents.
Benton offered, by way of introduction, a “sandwich,” consisting of three sentences. The first and last sentences in the succession, he explained, were quotes from King himself, while the middle sentence contained a quote from former U.S. President John F. Kennedy. “What we find when we enter these mortal plains is existence but existence is the raw material out of which all life must be created. With a good conscience as our only sure reward, let us go forth asking his blessing and his help, but knowing that, here on Earth, God’s work must truly be our own. A productive and happy life is not something that you find. It is something that you make.”
Bishop Harvey Claiborne, of the Christian Outreach Church in Americus, delivered the invocation for the ceremony.
GSW alum, Keisha Moseley, performed an inspirational song before senior mentor of the African American Male Institute, Dominique Mitchell, addressed the audience. Mitchell expressed his gratitude to the crowd for taking part in the day’s celebration before discussing King’s message of peace, compassion, and cooperation toward people from all walks of life and encouraged the audience to help to continue to keep that vision alive in their everyday lives.
The presentation of a commemorative wreath honoring King was then presented by the Americus-Sumter High School JROTC following Mitchell’s speech.
The wreath presentation was followed by a praise dance routine performed by GSW students Secrett Wingard and Alliyah Bandoo. The ASHS Gospel Choir followed with a performance of a song titled, “You Made a Way” to a standing ovation from the audience.
The event’s keynote speaker, Jerry L. Hardee, Ed.D., who has achieved a long list of accomplishments throughout his life, including receiving the Ron Brown Award for Corporate Leadership on behalf of the Levi Strauss Foundation from former U.S. President Bill Clinton; being named to the Colloquium of Scholars by the Martin Luther King Jr. International College of Ministers; and being named as a Candle in the Dark honoree for 2015 by the Lowndes County Valdosta Martin Luther King Committee. A lifelong educator, Hardee has spent the past 25 years as an executive administrator at three different institutions in the University System of Georgia, most recently serving as the president of Sherman College of Straight Chiropractic.
Hardee opened his address with a quote from King from a 1957 sermon. “Every now and then a human must decide whether he or she will walk in the creative light of altruism or the darkness of selfishness. This is a judgement. Life’s most persistent and urgent question is ‘What are you doing for others,’” he stated.
He asked all of the middle and high school students to stand and spoke directly to them, reminding them of the real meaning of King’s message. He encouraged them to learn as much as possible about the civil rights movement so that they will have a fuller understanding of “what people went through just for the simple opportunity to vote,” as well as to gain many other rights.
Hardee went on to speak about many of the significant accomplishments of the civil rights movement before addressing ongoing disparities in today’s culture. He spoke about lingering racism and discrimination in modern society and encouraged listeners to continue to fight against these injustices.
Hardee later reminded listeners of another quote from King. “Everyone can be great because everyone can serve.” He encouraged the crowd to take these words to heart and make sure to serve their fellow man, regardless of circumstances. “It takes a commitment to action … to take action against oppression … What a wonderful world this would be if we would follow [King’s] lead,” Hardee concluded.
Members of GSW’s Alpha Phi Alpha fraternity, Delta Chapter then presented Hardee with a plaque, thanking him for his speech and dedication.
GSW’s Dr. Martin Luther King Jr. Convocation Committee then presented the event’s coordinator, Pam Leverette, with a token of appreciation for her role in coordinating the event for the past 20 years.
To conclude the ceremony, the ASHS Gospel Choir led the crowd in singing the “Lift Every Voice and Sing” after audience members had joined hands.
A prayer of benediction was offered by the Rev. Wendy Peacock of Fellowship Baptist Church, Americus.

Kendrick pleads guilty to one count