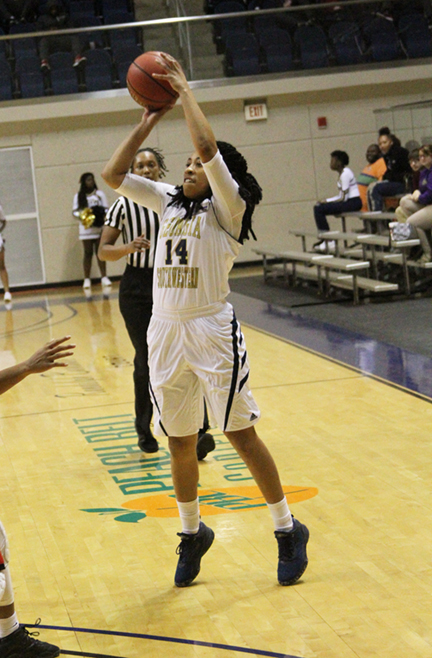 MICHAEL MURRAY I ATR: GSW’s Kris Beckham tosses up a three-pointer during a mid-January match-up at the Storm Dome in Americus.

The Georgia Southwestern State University (GSW) Lady Hurricanes slid to 11-4 over the past week, splitting decisions in a pair of road tests against USC Aiken and Armstrong University.
The Lady ‘Canes headed to Aiken, SC on Jan. 14 to battle USC Aiken. After a heated match-up, the GSW squad eventually succumbed to a 65-53 defeat. Two days later, the Lady Hurricanes hit the road for Savannah to take on Armstrong. The visitors made up for lost ground in that tilt with a 75-70 victory. Following these two Peach Belt Conference match-ups, the Lady Hurricanes’ currently enjoy a 6-2 conference record.
Despite out-scoring USC Aiken in the second half of the Jan. 13 game, the Lady Hurricanes were unable to make up for an early deficit and suffered the tough loss.
The Lady ‘Canes had a rough first quarter, only scoring seven points. They trailed 12-7 after Kris Beckham put in a three-pointer but USC Aiken quickly took off on a nine point run to lead 21-7 heading into the second stanza.
The second quarter proved to be a better showing for GSW. The Lady ‘Canes held USC Aiken to their lowest scoring quarter of 13 and scored 12 themselves to head into halftime down 34-19.
The Lady ‘Canes looked to make a comeback in the third, out-scoring USC Aiken 17-15. Chanice Whitton put in the first two baskets of the quarter to narrow the gap to 11 and GSW came within six points of the lead after Aleah Holden put in a jump shot, Brittany Grant made two free throws. Beckham followed with a jumper and Gabby Figgers added another a free throw.
USC Aiken came back with three jump shots to take a 12-point lead with three minutes remaining in the third. Whitton whittled the lead down to eight points with 1:27 left, but USC Aiken tossed in a three-pointer and two free throws to pull ahead 49-36 heading into the final quarter.
USC Aiken started the fourth quarter with a seven-point run to take a 20-point lead. Va’Queshia Hall and Grant brought it to 16 before Mallory Diamond, Figgers, and Khayla Owens dropped it to 11.
USC Aiken put in a three-pointer and a trio of free throws to lead 63-46 with 3:11 remaining.
Hall, Beckham, and Shanya Jones put in the last three baskets to come within 12 points.
GSW out-scored USC Aiken yet again in the fourth quarter but it wasn’t enough for a win and the GSW ladies suffered their second PBC loss of the season.
Whitton led the Lady ‘Canes with 14 points and grabbed seven rebounds. Hall had 12 points and Holden led the team on the boards with eight rebounds.
In the team’s ensuing match-up against Armstrong, Figgers scored a season-high 16 points to lead the team to victory.
The Lady ‘Canes tied the game twice in the first before going on an 11-point run to take a 13-4 lead six minutes in. Chanice Whitton tied the game 4-4 before Grant and Hall put in jump shots. Holden followed with a lay-up and Figgers topped off the run with a three-pointer.
GSW held Armstrong to 12 points and led by 13 going into the second quarter.
Armstrong went on a six point run to start the second to come within seven points and proceeded to pull within one point with 3:27 remaining in the half. GSW took a six-point advantage after Beckham put in a free throw followed by Grant with a trey and Whitton with a foul shot.
Despite out-scoring GSW 23-16 in the second quarter, Armstrong went into halftime down 41-35.
Armstrong out-scored GSW again in the third, going on an eight point run in the beginning of the quarter to take a one-point lead three minutes in. Beckham took the lead back with a jump shot and free throw. Armstrong tied it up and took the lead again. Beckham put in a jump shot to retake the lead once more with 5:55 left in the third.
The quarter went scoreless until the 2:17 mark when Figgers and Grant put in two free throws each to give GSW a five-point advantage and headed into the fourth quarter up 56-51.
The fourth quarter was an even fight with both teams putting up 19 points. Thanks to the Lady ‘Canes first quarter effort, GSW took the win and moved ahead in the PBC.
For the fifth time this season, Figgers came off the bench to score double digits for the Lady ‘Canes.
Holden scored 15 points and picked up nine rebounds. Grant also scored 15 points and Hall scored 11.
The Lady Hurricanes are home on Jan. 21 to host North Georgia in a conference game at 1:30 p.m.