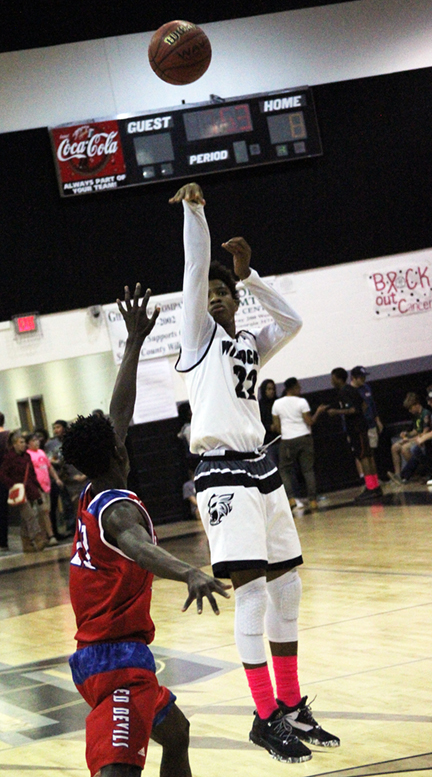 The Schley County Wildcats have been quite busy since the team kicked off 2017’s basketball schedule.
As of this writing, the Wildcats have more than doubled the team’s 2015-16 win total. So far this season, the Wildcats have amassed a 9-8 overall record and a 7-4 record in Region 4-A competition.
The ‘Cats kicked off the new year on Jan. 3 with a 54-47 come-from-behind road victory over a scrappy Greenville High School team. Down 24-17 at half-time, the Wildcats clawed their way back into contention in the second half, outscoring their hosts 12-9 in the third frame and cinching the win with a 25-14 final quarter.
The Schley crew rode this momentum into their next match-up against the Dooly County Bobcats in Vienna.
Once again, the Wildcats climbed their way out of a first-quarter deficit to earn a 69-63 win over their Region 4-A opponents.
The Wildcats pulled ahead early 18-17 in the first stanza, but fell victim to a strong offensive push from the Bobcats in the second quarter to enter the half-time break behind 38-34.
Schley’s boys made up for lost ground in the third period, outscoring their hosts 23-17 to take a 47-45 lead and put the game away in the fourth with a 12-8 quarter to clinch the win.
The Wildcats saw a spate of tough luck in their following two matches against a pair of resilient teams from Taylor County and Crawford County.
Taylor got the jump on the ‘Cats early in their Jan. 10 road test, taking an early 21-12 lead in the first quarter. The Vikings clung tightly to their lead, even though the Wildcats made an admirable run at a comeback in the third quarter to narrow the gap by five points. At the final buzzer, Taylor took the 54-45 victory.
The Jan. 13 match-up against Crawford County in Ellaville was much closer, however, as the Wildcats matched their guests nearly point-for-point to eventually suffer a 60-59 defeat.
Schley deftly broke the skid on Jan. 17, hosting longtime rivals, the St. Anne-Pacelli Vikings.
The Wildcats came out hot right from the beginning to earn a 24-10 advantage over the initial eight minutes of play. Pacelli narrowed the gap by three in the second quarter, but the ‘Cats persevered, tossing 11 marks on the scoreboard and holding their guests to only eight to take a 35-18 lead into the locker room at half-time. The Vikings stubbornly persisted when play resumed, delivering a 10-10 quarter for Schley’s home fans, but their efforts were stifled in the final stanza, when the Wildcats outscored the visitors 13-6 to earn the 24-point win.
From there, the Wildcats traveled to Montezuma on Jan. 18 to battle the Macon County Bulldogs, suffering a 71-56 defeat
Schley’s boys then traveled to Hawkinsville on Jan. 20 to take on the Hawkinsville High School Red Devils. The results of this match-up were not available at press time.
The Wildcats will return to their home court on Jan. 21 to kick off a three-game home stand with a tilt against the Mt. DeSales Academy Cavaliers.
The Wildcats will see the chance to even the score against Macon County on Jan. 24 before offering Dooly County the same opportunity on Jan. 27. Both contests will be held in Ellaville.