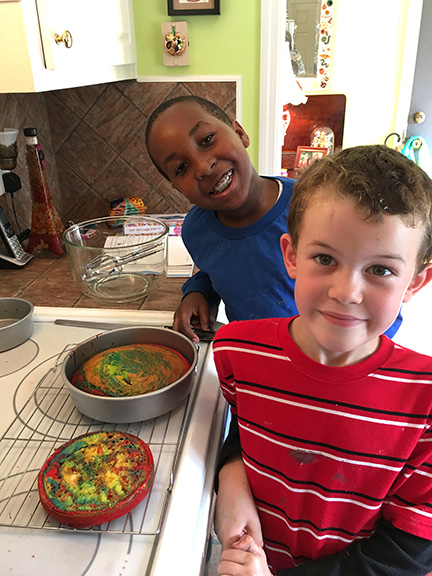 Food Network baking contestant Kaylon Harvey,in blue shirt, has a new friend, Adam Jones, who also likes to cook. On a recent day, the two young chefs put their heads (and hands) together and cooked up some sweet concoctions.

AMERICUS — Adam Jones, like many seven-year-old boys, is curious about many things – from creepy crawlers and toad frogs to playing varied sports. He enjoys trying his hand at a number of interests outside the classroom.
One venture is cooking – an area that drew his attention a couple of summers ago while watching a children’s cooking show on the TV Food Network with his grandmother Ruth Strickland Jones of Americus.
“I love to cook,” said Adam, and received encouragement from his grandmother and his dad, Tom Jones. In the past two years Adam’s cooking skills have developed from initially turning out hamburgers, hot dogs, muffins, and cookies on weekends for grandmother, dad and little sister, McKenzie, 4, to delving into more sophisticated culinary projects – the most recent a cooking session with a prize-winning young chef, Kaylon Harvey of Americus.
Kaylon, 11, had already proved his mettle as a food expert last fall by competing on Food Networks TV show, Kids Sweet Showdown, and winning a cash prize of $10,000 prize that was divided with his partner on the show.
Shortly after watching the program, Ruth by chance mentioned to her friend Mattie Harris how proud she and Adam were of the little boy from Americus winning the contest but was surprised to hear her friend’s reply.
“Mattie said ‘Kaylon is my grandson,’” said Ruth. “And when I told Adam, his first remark was he wanted to cook with him.” Ruth arranged to get them together in her kitchen on a recent school holiday.
By mid-morning the boys were hard at work and the kitchen was a virtual beehive of activity. Kaylon and Adam were confident in their mission and goal to bake two cakes: a moon cake and a tie-dye layer cake, a multi-colored creation that when finished looked like a beautiful mosaic. While the dome-shaped layer cooled on the counter, the other layers baked in the oven. The chatter and friendly banter between the two young chefs was lively and sister McKenzie observed nearby.
A quick soft drink and yogurt break allowed time for Kaylon to talk about his cooking background.
“I was about three when I began cooking with my mom Pamela Harvey,” said Kaylon. “Some of my favorites to cook are hamburgers, macaroni and cheese casserole, and sweets of all kinds, but mostly sugar cookies and brownies,” said Kaylon, an all A student at Sumter County Intermediate School.
With the help from his mother, Kaylon applied and was accepted to compete on the Food Network’s Kids Sweet Showdown that was televised last October and where he and his partner baked snow monsters, donuts, chocolate ganache, and brownies.
After the break, the young chefs returned to the job at hand. Unfortunately, the dome cake didn’t turn out of the baking pan well, dashing Adam’s hopes for the moon cake. “But Kaylon wasn’t discouraged,” said Adam, with a smile. “We’re going to make cake pops with it instead so it isn’t a disaster after all.”
The young chefs’ final results included tasty gray-frosted cake pops, and a luscious tie-dyed layer cake frosted in bright yellow.
The taste results were the proof of the pudding. Neither delicacy lasted too long – but were quickly consumed.