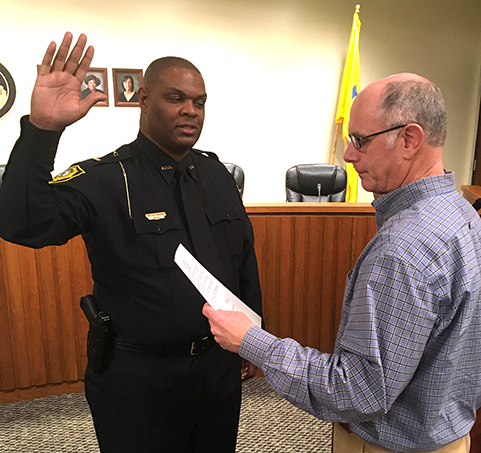 Americus Mayor Barry Blount is shown administrating the oath to Americus Police Sgt. Ahthony Jackson who was recently promoted to the rank of lieutenant.

AMERICUS — The Americus Police Department announces the promotion of two of its officers, effective Jan. 24.
Anthony Jackson has been promoted to the rank of lieutenant. He has been with the department for over 18 years. His most recent assignment was as the supervisor of the department’s Criminal Investigations Division. Jackson will be assigned to the Uniform Division as the Watch Commander for A Team. 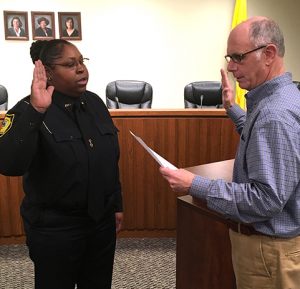 SUBMITTED PHOTO
Carolina Pittman has been promoted to the rank of sergeant. Americus Mayor Barry Blount is shown swearing her in.

Carolina Pittman has been promoted to the rank of sergeant. She has over 12 years of law enforcement experience, and has served with the Americus Police Department since 2010. Her most recent assignment was as a detective.  She will be assigned to the Uniform Division as the Shift Sergeant for D Team.
These promotions are the result of a vigorous promotional process which was conducted in August 2016.  The process consisted of a written exam and an oral board assessment for sergeant candidates, and a written exam, written scenario, and oral board assessment for lieutenant candidates.  The oral boards were composed of police supervisors from departments across the region. 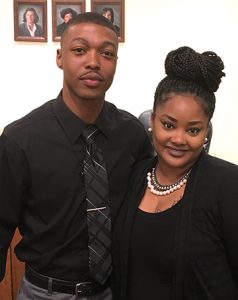 Officer Joshua Greene is moving to the investigations division of the Americus Police Department to train as a detective, He is shown with his wife Chantel.

The department would also like to congratulate Officer Joshua Green, who is being transferred from Uniform Patrol to the Criminal Investigation Division to begin on-the-job training as a detective.