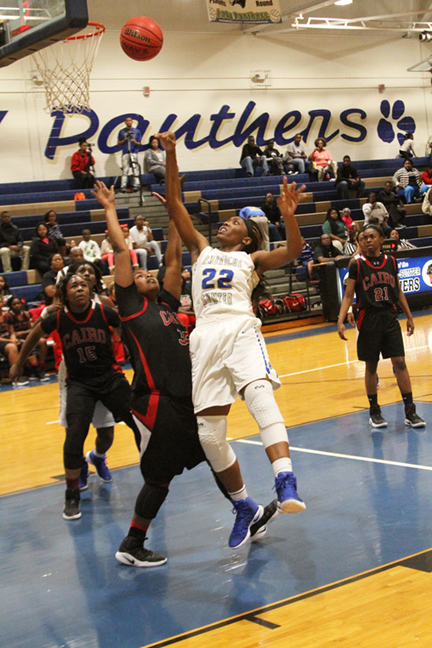 The Americus-Sumter High School (ASHS) Lady Panthers are currently tied for second place in Region 1-AAAA with the Columbus High School Lady Blue Devils. Both teams currently hold a 9-2 record in the region, just a hair behind Carver High School’s region record of 10-2.
Overall, the Lady Panthers hold a 19-3 overall record while the Carver Lady Tigers’ overall record is holding steady at 18-4.
The Lady Panthers defended their record last weekend in a pair of match-ups against Columbus High and Hardaway High.
On Jan. 27, the ASHS girls destroyed the Hardaway Lady Hawks 53-21 before taking on the Lady Blue Devils and earning a 49-46 overtime victory.
ASHS quickly amassed a 19-9 lead in the weekend’s opener against the Lady Hawks. The Americus ladies turned up the heat in the second half of the match-up, however, outscoring their hosts 20-5 in quarter three. The Lady Panthers added 14 more to their total in the final frame while holding Hardaway to seven in the final period to clinch the 32-point victory.
ASHS’ Timia Swanson and Jykiera Long set the bar high in the match-up, scoring 19 and 17 points, respectively. Zari Mays scored in the double digits as well, contributing 10 points to the win.
Swanson earned a double double in the tilt, pulling in 14 rebounds as Mays just missed the milestone with nine boards.
Long led the team from beyond the arc with two long shots and nabbed a game-high six steals. Swanson snagged five steals.
Shidajah Johnson led the Lady Panthers in assists, dishing out three. Mays contributed three blocks to the Lady Panthers’ defenses.
The following day, the Lady Panthers saw much stiffer competition in Americus as they put their skills to the test against Columbus High.
The ASHS ladies got off to a rocky start in the match and took a 14-10 deficit into the second stanza. The Lady Panthers stepped up their defenses in the second quarter to hold their foes to only six points and tie the score 20-20 at the half.
In a repeat of the second frame, the Lady Panthers outscored the Lady Blue Devils 10-6 in the third period to retake the lead. Columbus negated the threat in the final quarter, outscoring their hosts 13-9 to tie it up 39-39 at the final buzzer and force an extra period.
In the bonus frame, the Lady Panthers gained a 10-7 edge over their guests to, eventually, take the three-point win.
Swanson, once again, earned a double double in the match with 17 points and 11 rebounds. Mays added another eight points, followed by Mytesha Carson, with six.
Swanson led the team in steals and assists as well, with five in each category. DeAsia Ford nabbed four steals and dished out two assists. Swanson blocked one shot.
The Lady Panthers hosted the Shaw Lady Raiders on Jan. 31 in another Region 1-AAAA test. The results of this match were not available at press time.
The ASHS ladies will put their record on the line again in Americus on Feb. 3 when they host Hardaway.