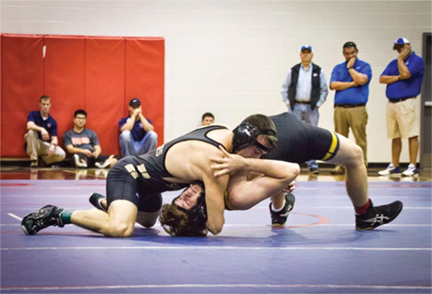 SUBMITTED BY LORI TURTON: Southland’s Billy Calcutt makes an attempt to end one of his matches match with a pin during the Region 3-IAAA traditional wrestling championships at Deerfield-Windsor School in Albany on Feb. 11. 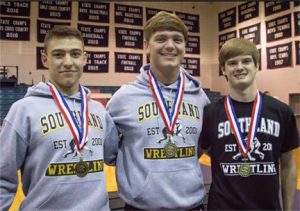 SUBMITTED BY LORI TURTON:
The three senior members of the Raiders’ wrestling team each won Region 3-IAAA titles in their respective divisions. Pictured above, from left, are Billy Calcutt, Stephen Turton, and Tanner Rundle.

Southland will host the Wrestling State Championships at the Georgia Southwestern State University Storm Dome on February 10-11.
Southland wrestling coach, Josh Hicks, expressed his anticipation of the team’s potential to excel in the state tournament, stating, “The Raiders are peaking at the right time and have been getting major contributions from everyone on the roster.”