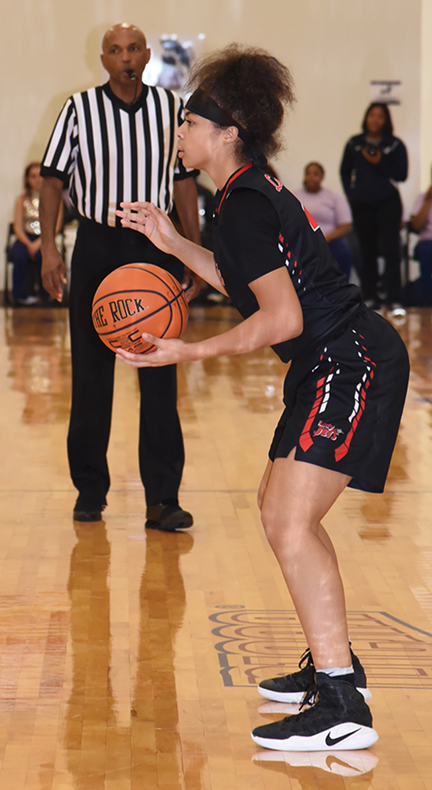 SUBMITTED BY SOUTH GEORGIA TECHNICAL COLLEGE: Camille Coleman (4) was the top scorer for the Lady Jets against Central Georgia Tech in Macon.

The South Georgia Technical College(SGTC) Lady Jets have successfully defended their undefeated Georgia Collegiate Athletic Association record once again in a trio of tilts against Andrew College, Central Georgia College, and Chattahoochee Tech over the past two weeks.
On Feb. 1, the Lady Jets faced Andrew College in Cuthbert, returning home with an 89-60 victory under their belts. Three days later, on Feb. 4, the Lady Jets repeated this performance, taking a 68-55 win in a clash against Central Georgia in Macon. The SGTC ladies rode this momentum into their 10th straight win of the season with an 88-63 thrashing of Chattahoochee Tech on Feb. 8.
With these wins, the Lady Jets remain squarely in the number-one spot in the GCAA with a 10-0 record, followed by Georgia Highlands, with a 7-1 conference performance.
The Lady Jets are currently 22-3 overall.
In the Lady Jets’ opening match of February, the SGTC team fell behind in the opening quarter against a very aggressive Andrew College team. Andrew was up 16-12 at the end of the first quarter, but the Lady Jets bounced back in the second period to go up 38-33 at the half. They never allowed Andrew to regain the lead and took the 11-point decision.
SGTC’s Kanna Suzuki had an awesome game, hitting six of 10 three-point shots, four of her six free throws, and three of six regular field goals on her way to 28 points. Suzuki also pulled contributed a total of six rebounds, six assists and five steals on the night. Her outstanding effort was complemented by sophomores, Camille Coleman and Desiree Corbin, who both also scored in double-figures.
Coleman added 14 points, six rebounds, three assists and three steals, while Corbin tossed in 10 points alongside 14 total rebounds, one assist, three steals, and five blocked shots.
Shaineequah Fluellyn had eight points. Trakyra Kidd added seven points. Esther Adenike scored six points and pulled down 13 rebounds.
“We did not play well,” said SGTC Athletic Director and Lady Jets head coach, James Frey. “Kanna Suzuki may have been the difference in the game with her three-point shooting, but we have to be more consistent on offense and defense.”
The nationally-ranked Lady Jets captured their ninth-straight victory on Feb. 4 when they rolled to a 68-55 win over the Central Georgia Technical College women.
“We should have won by a much larger margin, but we just didn’t execute in the fourth quarter,” said Frey. “We only scored four points in the final 10 minutes of that game. We had a 64-36 lead going into the fourth quarter and gave up 19 points while only scoring four points. We can’t play like that and win at the next level.”
Coleman was the leader on the court for the Lady Jets in their victory with 18 points, seven rebounds, five assists, and four steals. Adenike was the only other Lady Jet in double-figures with 10 points, 12 rebounds, one assist, four steals and two blocked shots.
Fluellyn and Mahouchiza both added eight points. Fluellyn added four rebounds, four assists and one steal while Machouchiza came up with six rebounds, three steals and two blocked shots. Madison Cameron scored seven points. Sceret Ethridge had six points, and Suzuki tossed up five. Corbin added four points before she had to leave the game with a busted chin that required eight stitches. Despite that, she had nine rebounds and one blocked shot in the first nine minutes of the game.
Both the Jets and Lady Jets return home on Feb. 11 for a big conference double-header against Georgia Highlands. The Lady Jets play at 1:00 p.m. and the Jets play at 3:00 p.m.