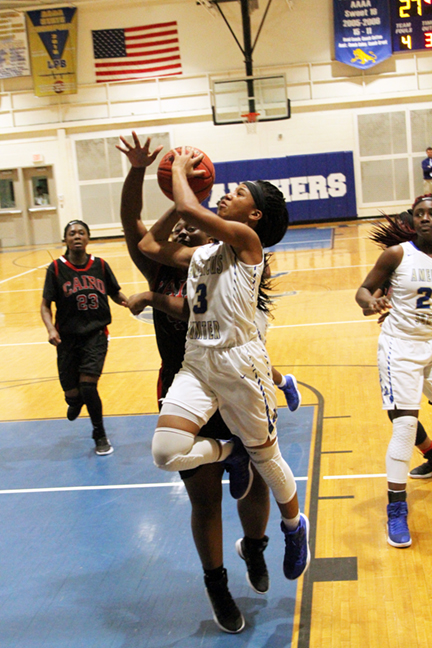 Both the Americus-Sumter High School (ASHS) Panthers’ and Lady Panthers’ basketball teams saw a bit of tough luck in Columbus on Feb. 10 for their final match-ups of the 2017 Region 1-AAAA tournament.
The Panthers, vying for the region crown against the Carver Tigers, took a hard 85-63 defeat in their test before the Lady Panthers took the court to suffer a 60-54 defeat at the hands of the Shaw Lady Raiders in their consolation game.
Despite the loss, the Panthers’ overall and region record records both reflect two more victories than the Tigers’.
Both teams will still get a crack at making it to the state championship, however, with the action kicking off on Feb. 17.
The Panthers will be hosting the Thomson Bulldogs in a bitter rivalry match that is certain to bring out some fierce competition from both teams. Many of ASHS’ multi-sport athletes will likely be looking to even the score with the Bulldogs after the Thomson gridiron squad took the Panthers’ football team out of the state running in mid-November. This match-up is certain to be a must-see event.
The Panthers will enter the match with a 21-6 overall record and a 13-3 performance in Region 1-AAAA. The Bulldogs currently enjoy a 14-11 overall record and a 6-4 mark in their region.
The defending state champion Lady Panthers will be hitting the road for Augusta that same day to meet the Cross Creek High School Lady Razorbacks on their home court. The Lady Panthers will be putting their 23-5 overall record on the line against the 23-4 Lady Razorbacks. A quick comparison of the teams reveals that the Lady Panthers are currently 10-1 against out-of-region opponents while the Cross Creek ladies are 4-3 in the same category.
In the Panthers’ final region match-up against the Tigers on Feb. 10, the ASHS crew got off to an uncharacteristically slow start, with the Tigers besting the visitors 22-15 in the initial frame. The Tigers continued to pull ahead before the half-time buzzer, taking a 38-21 lead into the break. The hosts kept up their momentum in the third frame. Though the Panthers saw their most productive quarter of the game in the final stanza with 27 points, the comeback effort fell short and Carver gained the win.
ASHS’ Eric Hall and Malik Jackson each hit double figures in the tilt. Hall led the charge with 19 points. Jackson was spot-on in four of four attempts from beyond the arc on his way to 14 points. Kiante Sims and Jurrell Jones each added eight points for the ASHS cause.
Sims led the team’s rebounders with four, followed by Hall and Jones, who each brought down three. Eric Brown led the team in assists, dishing out four while Hall snagged three steals in the match.
Joshua Moore contributed one block for the Panthers’ defense.
The Lady Panthers also got off to a rocky start when they put their skills to the test against the Lady Raiders on Feb. 10, with the Shaw team pulling ahead 18-9 in the first quarter. The ASHS ladies narrowed the deficit in the second stanza, outscoring their opponents 15-11 to trail 29-24 at the half. Shaw hung on tightly to their lead in the second half as the teams traded blows and, eventually, took the six-point victory.
ASHS’ Jykiera Long was on fire from behind the three-point line, sinking five shots from downtown on her way to 23 points. Timia Swanson was the other Lady Panther in double figures with 10 points.
Zari Mays led the team on the glass, contributing 11 rebounds, followed by Swanson, who added nine. Swanson also dished out a quartet of assists in the test. Long led the team in steals with three, followed closely by Mytesha Carson, who grabbed two. Mays blocked two shots for the Lady Panthers.