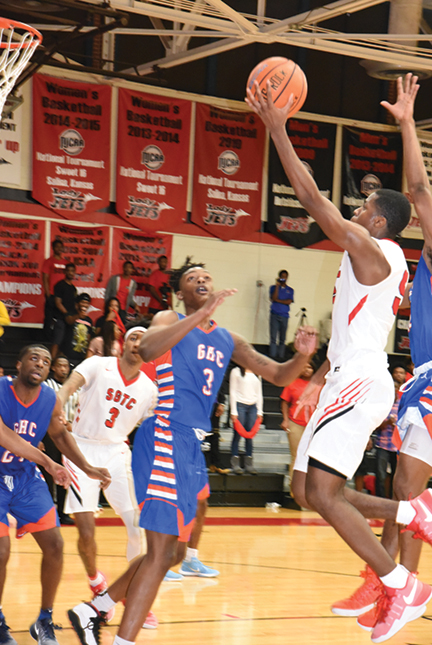 SUBMITTED BY SOUTH GEORGIA TECHNICAL COLLEGE: Shown above, SGTC’S Mike Boone led the Jets in scoring with 26 points in the team’s Feb. 11 match-up against the Georgia Highlands Chargers.

“Two great games” was the way one fan described the Jets and the Lady Jets performances on Feb. 18. The number-18 nationally ranked Lady Jets retained their top seed in the Georgia Collegiate Athletic Association (GCAA) conference with a 74-50 victory over the second-ranked Georgia Highlands Lady Chargers. The Jets then took the number-two nationally ranked and undefeated Georgia Highlands Chargers to overtime before falling 101-95.
“I was happy with the way we started the game,” said South Georgia Technical College (SGTC) Athletic Director and Lady Jets head coach, James Frey. “We traditionally start slowly, but we came out with a lot of energy and executed well. We were able to play pretty consistently throughout the game and were able to keep a decent lead.”
However, the win may have come at a huge cost. Sophomore guard, Camille Coleman, went down with a knee injury in the final minutes of the game. “We have had to play through a lot of adversity for the past few weeks and I am pleased that we have kept our focus and continued to play hard and give great effort,” said Frey. “Camille Coleman and Shaineequah Fluellyn were great for us against Georgia Highlands. Kanna Suzuki continues to shoot the ball really well from the perimeter but our challenge now is keeping everyone focused and working hard and seeing who will step up over the next few weeks. We have a long way to go to reach the goals we set in the pre-season, but I am pleased with our growth to this point.”
Suzuki was the top scorer for the Lady Jets with 18 points. She went three of five from field goal range, three of eight from the three-point line, and three of four at the free throw line. Fluellyn was close behind with 15 points. She hit two of four from the field, three of eight from three-point range, and two of six at the foul line.
Coleman managed to score 14 points before she left the game injured. She also pulled down five rebounds and dished out three assists. Trakyra Kidd came off the bench to score 11 points. Seven of those were from the free throw line.
Desiree Corbin added nine points. Esther Adenike added another five and Madison Cameron closed out the scoring with two points.
After the Lady Jets captured their 11th consecutive victory to move to 11-0 in the conference and 23-3 on the season, the Jets came out and put on a show against the number-two team in the National Junior College Athletic Association, the Georgia Highlands Chargers. The Jets were up 45-39 at the end of the first half and the two teams were tied at 80-80 at the end of the regulation buzzer. In overtime, however, Georgia Highlands outscored the Jets 21-15 to capture the 101-95 victory.
“I thought we played our hearts out and that’s all I can ask of my team,” said Jets head coach, Travis Garrett. “We had our chances at the end, but we didn’t seize the moment with free throws and layups. Even with that, we played a very good team, and I am very proud of my guys. If we play with that same emotion and effort down the stretch and clean up our mistakes, we can still accomplish our goals. Special thanks to everyone that came out and supported us, our players truly appreciated it.”
The Jets were up by as many as 13 points in the first half and were still up 45-39 at half-time. The loss of sophomore guard, Tre’Von Teague, with a bruised heel injury at the end of the first half, however, proved costly for the Jets. Georgia Highlands came back and outscored the Jets 41-35 in the second half to tie the game and force an overtime period. The Chargers took control in the five-minute overtime to capture the win.
Freshman guard, Mike Boone, led the Jets in scoring with 26 points. Sophomore, Andre Kenned,y had 17 points and nine rebounds. Bobby Jackson earned a double double with 15 points and 10 rebounds while Jalen Thomas came up with 12 points to close out the double digit scoring.
Teague had nine points despite only playing 10 minutes in the 45-minute game. Davion Clark also had nine points. Pat Welch had three points as Kashif Davis and Marquel Wiggins closed out the scoring with two points each.
Both the Jets and Lady Jets will be back at home on Feb. 15 at 5:30 and 7:30 p.m. with conference matchups against East Georgia College. The Jets defeated East Georgia 65-59 earlier this season. The East Georgia women are currently ranked third in the conference behind SGTC and Georgia Highlands. SGTC defeated them 63-59 in Swainsboro. East Georgia is currently 7-3 in the GCAA and 16-6 overall.
Wednesday night is Kauffman Tire Night at SGTC. All fans will have the opportunity to have their name drawn to win a free set of four tires with a half-court shot during the men’s and ladies games. If the fan miss the half-court shot, the individual will have a chance to win two free tires with a three-point shot.