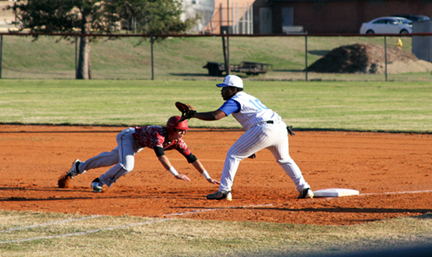 MICHAEL MURRAY I ATR: ASHS’ Devin Hudson reaches out to snag the ball as a Cairo runner scrambles back to first base during the first inning of the Panthers’ season opener against the Syrupmakers.

AMERICUS – There’s nothing like opening day on the baseball diamond, especially when the weather is as perfect as it was on Feb. 16 at Thomas Bell Stadium. That was when the Americus-Sumter High School Panthers kicked off their 2017 season against the Cairo Syrupmakers.
The Cairo squad brought an experienced team to the Americus diamond to face the relatively young Panthers. To their credit, the Panthers held the score at 1-1 through four innings before the Syrupmakers sparked a rally in the top of the fifth that eventually led to the visitors taking an 8-1 win.
Cairo put the first mark on the board in the top of the third and the Panthers responded in the bottom of the fourth. Brandon Alford set the stage for the Panthers’ first run when he was plunked at the plate. With Braelin Williams up to bat next, Alford took a chance and stole second. Devin Hudson then took his turn at the batter’s box and Alford went for it again, stealing third base. Hudson proceeded to draw a walk.
Christian Mable then knocked a single deep into left field, giving Alford plenty of time to complete his round trip and tie the score 1-1 to the cheers of the Panthers’ supporters.
In the following inning, the Syrupmakers connected on a few solid hits and exploited a pair of ASHS errors to pull ahead 5-1. Cairo would go on to add another run in the sixth and two more in the seventh. 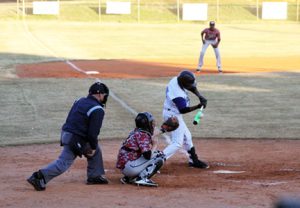 MICHAEL MURRAY I ATR:
ASSHS’ Kendall Butler connects with a fastball during the Panthers’ opener against the Cairo Syrupmakers on Feb. 16 in Americus.

The Panthers made a strong stab at a comeback rally in the bottom of the seventh, taking advantage of a few Cairo mistakes. Williams opened with a walk and Mable followed with a single to left field and proceeded to steal second with Lemario Larry at the plate. Larry then took one for the team when he was struck by a pitch, loading the bases.
Terrende Rush followed with a hard grounder, but the ball beat Williams to the plate by a split second and the fans groaned when the umpire pronounced him “out”. The Panthers’ final batter went out swinging and the game was called.
Mable collected a pair of hits for the Panthers in the tilt. Williams and Rush connected on hits as well. Alford contributed two stolen bases in the match while Rush stole one.
Kendall Butler handled pitching duties for the Panthers for 5.1 innings before turning over the mound to TJ Rush, who closed out the game. Butler struck out five batters while TJ Rush dispatched two.
The Panthers will take a short break before returning to the diamond on Feb. 23 to face the Irwin County Indians in Americus. The team will then travel to Cairo on Feb. 27 for a chance to even the score against the Syrupmakers.