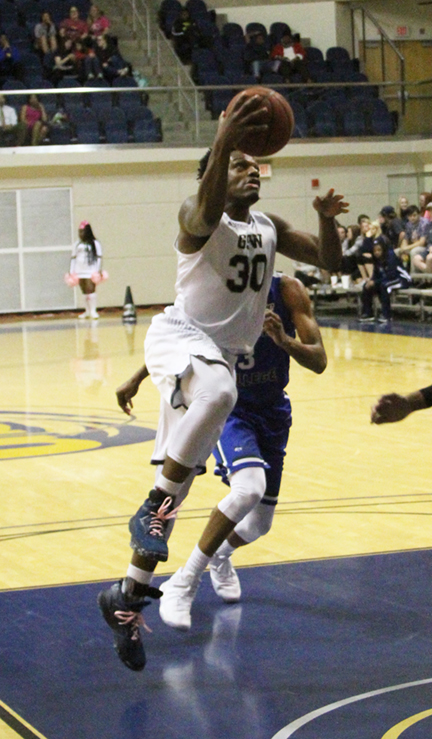 MICHAEL MURRAY I ATR: GSW’s Tevin Wise makes a leap for the bucket during the Hurricanes’ Feb. 15 match-up against Georgia College.

AMERICUS – The Georgia Southwestern State University (GSW) men’s basketball team suffered a 63-53 loss on its Senior Night in the Storm Dome on Feb. 15 against Georgia College.
GSW suffered its seventh loss in eight games and fell to 7-17 overall this season, 5-12 in the Peach Belt Conference. With the win, Georgia College improved to 15-11, 9-8 in the PBC.
Neither side could score in the early going as the game was tied, 7-7, approaching the 10-minute mark.
Jaylen Waters made a layup with 7:25 left in the half to give GSW its final lead of the evening, 12-11.
Georgia College scored on its next possession to regain the advantage and kick off a 17-2 run to close out the opening period. 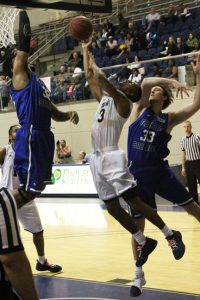 MICHAEL MURRAY I ATR:
GSW’s Tyrone Wooten tosses in a lay-up during the ‘Canes’ Feb. 15 home tilt against Georgia College.

GSW fell behind by 16 points, its largest margin of game, with 18:12 remaining before methodically chipping away at the deficit. Senior, Cameron Dozier, drained one of the Hurricanes two three-pointers of the night with 13:40 left to pull within nine points, 37-28. His lay-up with 11:09 to go brought GSW within five points, 39-34.
Senior, Tyrone Wooten, knocked down GSW’s other three-pointer with 9:08 to go, making it a four-point contest. That’s as close as the Hurricanes would get.
The deficit hovered around six points until there was under two minutes remaining and GSW had run out of gas.
The Hurricanes turned in their second-worst shooting night from beyond the arc this season by connecting on 2 of 18 attempts (11.1 percent).
GSW had two of its five starters held scoreless, but Cameron Clayton notched a game-high 18 points while Wooten and Dozier added 14 and 11 points respectively. Wooten pulled down a career-high 15 rebounds to post his fourth double-double in the last six games.
Austin Dukes led Georgia College with 16 points. Isaac Thomas finished with a double-double, scoring 10 points and grabbing 11 rebounds.
The Hurricanes travel to Young Harris College on Feb. 17 for a 3:30 p.m. game.