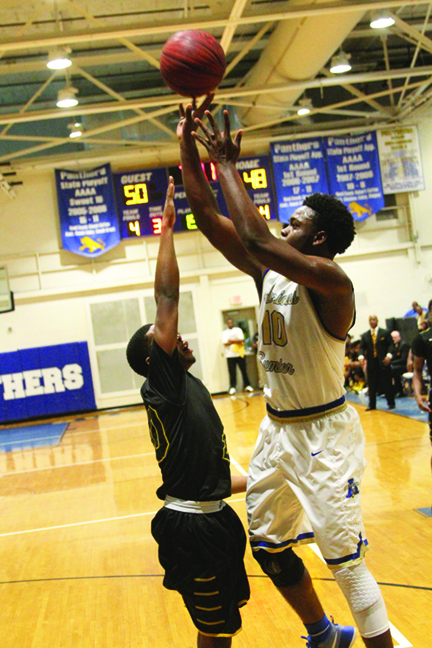 MICHAEL MURRAY I ATR: ASHS’ Jurrell Jones tosses up a jumper during the second half of the Panthers’ state tournament match-up against the Thomson Bulldogs on Feb. 18 in Americus.

Following a pair of very productive seasons, the Americus-Sumter High School Panthers and Lady Panthers saw their hopes for a state title dashed this past weekend.
The Lady Panthers traveled to Augusta on Feb. 17 to take on the Cross Creek Lady Razorbacks in the first round of the state tournament. Despite an admirable performance from the ASHS girls, the team succumbed to a late surge from their hosts to take a 60-51 defeat.
The Panthers hit the court in Americus on Feb. 18 to face longtime rivals, the Thomson Bulldogs, in their first-round match-up of the state tourney. The Panthers battled their way through an up-and-down contest to tie the score 58-58 at the end of regulation play, forcing an overtime round. In the four-minute bonus period, the Panthers got into some foul trouble, giving the Bulldogs the chance to take the 67-62 victory.
The Lady Panthers capped off their season with a 23-6 overall record and a 12-4 mark in Region 1-AAAA. The Panthers ended with a 21-7 overall record and a 13-3 performance in the region.
The Lady Razorbacks will go on to face Lagrange in round two of the tournament on Feb. 22, while the Bulldogs will be taking on Blessed Trinity on Feb. 23 for their second match of the tourney.
The ASHS ladies got off to their characteristic strong start in the Feb. 17 match-up, pulling ahead 18-11 over the first eight minutes of play. The Lady Razorbacks made some moves in the second frame to narrow the deficit to 26-22 by half-time.
Cross Creek cut ASHS’ lead by two more points in the third frame before exploding into the final quarter for a 29-point performance. The Lady Panthers added 18 points in the final stanza, eventually taking the nine-point loss.
ASHS’ Jykiera Long led the Lady Panthers from the floor, connecting on five three-pointers in the match on her way to 22 points. Timia Swanson joined her in double figures with 18 points. Swanson also brought down 15 rebounds for the Lady Panthers while Long pulled in four. Both players contributed four steals and two assists.
Shidajah Johnson dished out three assists and nabbed two steals while Mytesha Carson assisted on three shots and stole one ball.
Swanson contributed one block.
The following afternoon, the Panthers faced off against the Thomson crew. The teams kept the scores tight through the first frame, with Eric Hall and Kiante Sims tossing in the first buckets for ASHS. After three minutes of play, Joshua Lusane gave the Panthers their first lead of the night (7-5) with a Jurrell Jones-assisted three-pointer.
Hall followed with a jumper before Sh’Qual White sank a shot from the key. Lusane, Zyriech Allen, and Eric Brown got in on the scoring action as well, but the Bulldogs persisted, tying the score 16-16 at the first buzzer.
Jones opened the scoring in the second frame with an assist from Lusane, who contributed a block moments later. Karmil Hamilton added a steal before Sims tossed in three more points to tie the score 22-22. From there, the Bulldogs began to steadily pull away, amassing a 37-31 lead at the half. 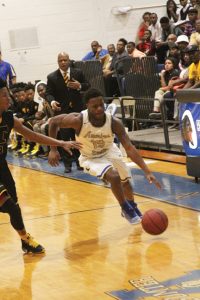 MICHAEL MURRAY I ATR:
ASHS’ Stephon Luster drives down the court during the second half of the Panthers’ state tournament match-up against the Thomson Bulldogs on Feb. 18 in Americus.

The Panthers made their comeback in the third period, with several team members adding buckets, including Stephon Luster, who drove past several defenders for a lay-up to put the Panthers ahead 45-43 at the 3:05 mark. Thomson ended the third period with a pair of free throws to tie the score once again, 48-48.
The showdown continued in the fourth frame as Thomson slowly pulled ahead, taking a 58-55 lead by the 3:15 mark. Hall tossed up a three-pointer with an assist from Lusane with 31 seconds left in regulation play.
The crowd went wild, roaring their approval as the clock ticked down and the teams prepared for a bonus period.
Sims opened the overtime round with a pair of shots from the charity stripe. Thomson quickly added a pair of their own, followed by a jumper. The Bulldogs added several more free throws after drawing several fouls. Sims converted a rebound in the final seconds, but the Panthers’ efforts fell just short and the team was handed the five-point loss.
Sims set the pace for the Panthers’ offense with 16 points, followed closely by Hall, who tossed in 13. Lusane added 10 more points. Jones, Luster, and White each tossed in six points.
Hall, Sims, Jones, Brown, and Kobe Lewis each nabbed two steals. Lusane led the team in assists with three, followed by Hall with two and Jones, White, and Brown, who each assisted on one.
Lewis and Lusane each blocked shots in the match.
ASHS head coaches, Sherri Harris and Michael Hoffpauir, spoke with the Times-Recorder after their teams’ respective matches.
On the Lady Panthers’ season, Harris stated that she was pleased with the team’s performance throughout the season and that she is looking forward to seeing what next year’s team will accomplish.
“We lost eight seniors from last year’s championship team. We had eight middle school girls come up, but only two of them… stayed the entire season…. Next year, we’ll have five more middle school and ninth-grade girls coming in so, hopefully, we’ll be able to keep a large number of them and maybe some of those ninth-grade girls that didn’t play this past season will come back out.”
On the Panthers’ performance in their state tournament match-up, Hoffpauir stated, “They played hard. I was very happy with the way we played… In a playoff game, free throws and lay-ups, as I always say, win games. We missed 12 big ones tonight. We hit 13 for 25 [free throws] tonight. If you don’t make those, you’ll have a tough time winning.”
On the team’s prospects for next season, Hoffpauir told the Times-Recorder, “We’ll be losing some good seniors. We’ll miss those guys. Those are the players that were here as sophomores when I first came in… I’ll miss them. We have some good guys coming up. Our freshman team competes well. We have some sophomores on the [junior varsity] team that are very competitive. We have some good things coming down the pipeline. We’ll be young and inexperienced, but we’ll be able to compete.”
“I’m very impressed with what we did this year,” Hoffpauir continued. “We did a lot of growing up. I always tell the kids that it’s not about wins and losses, it’s about how we evolve as young men. I feel like we’ve given our guys enough experience and enough knowledge to carry that throughout a lifetime…”