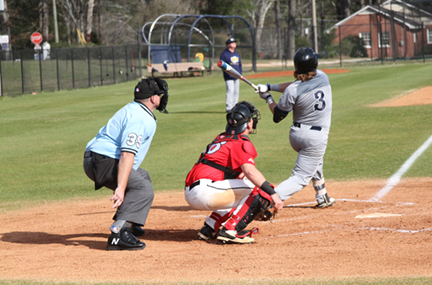 MICHAEL MURRAY I ATR: GSW’s Zach Barron follows through after a powerful hit as UNG’s catcher and the umpire watch the ball sail over the left field fence. Barron nailed his solo homerun to open the scoring in the Hurricanes’ first match-up of the weekend series against UNG.

AMERICUS – The Georgia Southwestern State University baseball team rallied from three runs down in the series finale on Feb. 18 at Hurricane Stadium to salvage a win over the weekend against the University of North Greenville (UNG). The Hurricanes jumped out to a 7-0 lead in the opener on Feb. 17 before falling, 16-7. North Greenville cruised to a 5-0 win in game two Friday night and GSW claimed the finale, 4-3 the following afternoon.
Zach Barron opened the scoring with a solo shot for the Hurricanes in their two-run second inning during the series opener on Feb. 17.
GSW added five more in the third to go up by seven runs. Dakota Long knocked in a pair, as did Jared Jones.
North Greenville got two runs back in the fourth inning with back-to-back solo home runs from Nathaniel Maggio and Taylor McCuen.
GSW took a four-run lead to the seventh before the bottom fell out. North Greenville brought 14 batters to the plate over an eight-run outburst that put the game out of reach. The Crusaders added five more in the ninth.
Will Redding led the Hurricanes’ offensive attack in the opener, going four-for-five with a pair of doubles. Alex Kranick added three hits, scored twice and batted in one run.
GSW used six pitchers. Starter, Kyle Spinks, did not factor in the decision despite holding UNG to three runs over six innings. He walked two and struck out five.
In the second game of the afternoon, The Hurricanes struggled to get their bats going against University of South Carolina transfer Canaan Cropper. GSW was held to three hits over the seven-inning game.
Cropper, the number-two high school prospect coming out of Maryland in 2013, according to Perfect Game USA, walked two and struck out nine.
GSW starting pitcher Dylan Brown (0-2) did his best to hang with Cropper, but surrendered one earned run over four innings to take the loss. Drew Powers was charged with one unearned run in two innings of relief.
The Hurricanes saw their chance to make a comeback in the series closer the next day.
The Hurricanes rallied from three runs down in the seventh inning to knock off UNG in the finale.
UNG scored a run in the fourth inning and two more in the fifth to put GSW in the three-run hole.
Facing another SEC transfer, GSW forced former University of Georgia hurler, Blake Hamilton, out of the game with two outs in the seventh. Long opened the frame with a double, moved over to third when Barron grounded out to third and scored on the next play when Jones grounded out to third. Following a walk to Andy Moore and a single by Aaron Crowe, NGU went to its bullpen. Back-to-back singles from Clay Patrick and Evan Alderman plated three runs and gave GSW the lead.
Relief pitcher, Lawson Stewart, (1-0) earned the win for GSW with two scoreless innings of relief. Mitch Holloway picked up his second save of the save by throwing a scoreless ninth.
The Hurricanes returned to the diamond in Americus on Feb. 21 to host Middle Georgia State. The results of this test were not available at press time.
The ‘Canes will be traveling to Columbus on Feb. 24 for a three-game series against Columbus State. The team will return to Americus on March 1 to take on Valdosta State.