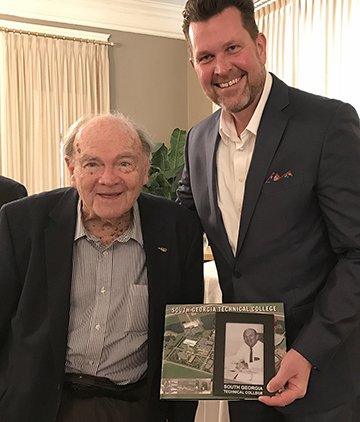 AMERICUS — Harold Edward Moore was honored by his family, friends, and many former co-workers recently when his wife and family hosted a 90th birthday celebration for the former South Georgia Tech employee at the Carnegie in Americus.
South Georgia Technical College (SGTC) President John Watford, Ed.D., SGTC President Emeritus Sparky Reeves, and former SGTC President Jon Johnson were all on hand to wish “Dean Moore” a happy 90th birthday. Many of his former co-workers and friends were also in attendance. 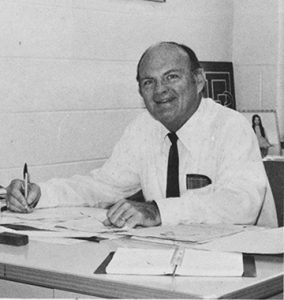 Dean Harold Moore is shown above at his desk at South Georgia Technical College.

Moore was hired as the Dean of Students at South Georgia Trade and Vocational School on June 1, 1960, and he served the school for over 28 years before retiring on July 31, 1988. At that time, the school was listed as part of the Vocational Education Department of the State Department of Education.
He and his family lived on campus and as Dean of Students, Moore was responsible for all aspects of students. He was in charge of admitting students and supervising general orientation of all new students. He was also the supervisor for all major discipline problems, the dormitory supervisor, in charge of students’ records, graduation and related activities, veteran affairs and other duties as assigned.
Moore received an associate degree from Middle Georgia College in Cochran in 1948, and then attended the University of Florida, Gainesville, Fla. He graduated from there with a bachelor of science in physical education and health in 1951. He attended the University of Georgia for his vocational education training.
Moore was hired by SGTC Director Horace Odom. He had previously worked at the Bainbridge Air Base in Bainbridge where he scheduled classes for physical training for pilot trainees for the U.S. Air Force. He had served as a paratrooper in the Army 11th Airborne Division.
Moore worked for South Georgia Tech Directors Odom, Hugh Ford Hayes, and Dea O. Pounders. He also had the opportunity to work with former Presidents Jon Johnson and Sparky Reeves, even though he retired before they were promoted to the president position. He retired before Watford started working at SGTC.