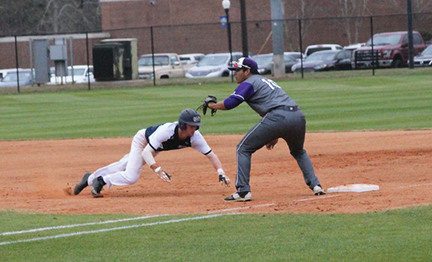 MICHAEL MURRAY I ATR: GSW’s Will Redding scrambles back to the bag to avoid getting picked off during the Hurricanes’ Feb. 21 home contest against Georgia State.

AMERICUS – Middle Georgia State University scored the first seven runs of the game on Feb. 21 at Hurricane Stadium in Americus and cruised to a 7-2 win over Georgia Southwestern State University (GSW) in a non-conference baseball matchup.
GSW has dropped six of its last seven games to fall to 4-7 this spring while Middle Georgia improved its record to 12-4.
The Hurricanes found themselves in another early hole as Middle Georgia plated two runs in the first inning.
Middle Georgia put two more runs on the board in the fourth and another pair in the seventh before tacking on its final run in the eighth.
Zach Barron put the Hurricanes on the board in the bottom of the eighth with an RBI single to center field to score Alex Kranick, who singled earlier in the frame. Dakota Long proved to be the final scorer of the afternoon when he was pushed home following a bases loaded balk.
GSW left runners on second and third to close out the eighth and were unable to bring around Aaron Crowe after he belted a one-out double in the ninth.
Kranick, Crowe, and Jared Jones collected two hits apiece to lead GSW batters.
Andy Mocahbee went three-for-four with a double and an RBI for Middle Georgia. Will Golden was two-for-three at the plate with a double, walked twice and drove in a pair.
Hurricanes starter Jarrod Crum (0-2) threw four innings, allowed three earned runs and six hits, walked one batter, and struck out three. Drew Powers tossed one and two-thirds innings of scoreless relief. Coty Graham gave up a pair of runs in his one and one-third innings on the hill while Matt Hubbard and A.J. Hayes each took an inning out of the bullpen.
Middle Georgia used five pitchers in the game as well. Starter Jared Crews (1-0) kept GSW scoreless for six innings. He scattered four hits, walked one batter, and struck out four.
GSW began Peach Belt Conference play Friday at Columbus State. The results of the first match-up of the series were not available at press time. The series will continue on Feb. 25. Game times are scheduled for 1:00 p.m. and 4:00 p.m.