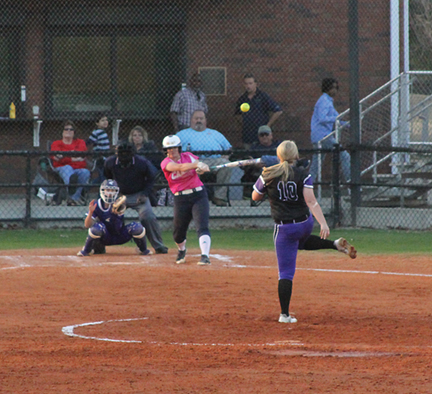 MICHAEL MURRAY I ATR: GSW’s Hannah McCain swats a ball into centerfield during a Feb. 14 match-up in Americus. McCain hit a grand slam in the Lady ‘Canes’ Feb. 21 opener against Albany State.

The Georgia Southwestern State University (GSW) Lady Hurricanes softball team saw an impressive seven-game winning streak brought to a halt in their Feb. 21 afternoon closer.
The Lady ‘Canes opened the double-header with an 11-10 victory over Albany State thanks, in part, to a grand slam off the bat of Hannah McCain before the Lady Rams closed the series with a 7-2 victory.
The Lady Hurricanes kicked off their streak on Valentine’s Day with a pair of wins over Middle Georgia State (8-3, 3-2).
The GSW ladies rode this momentum into their Feb. 18 contests against Emmanuel College, winning the first tilt 4-2 and the afternoon nightcap, 7-2. The following afternoon, the Lady ‘Canes hosted LaGrange College, taking the first match of the afternoon 5-4 and dominating in the evening’s closer, 8-5.
As of press time, the Lady Hurricanes enjoyed an 8-6 overall record. The team will begin Peach Belt Conference competition on March 4.
The Feb. 8 opener went scoreless until the fourth inning when Mikela Barlow scored off a single from Allee Denney and Joshlyn Martin scored off a wild pitch to give the Lady ‘Canes a 2-0 lead. In the following frame, Ella Hawkins scored off a double from Barlow and Barlow scored off a single from Hayley Tierce.
In game two against Emmanuel, the Lady ‘Canes scored three in the first inning. Barlow and Tierce scored off a double from Denney before Denney scored off a base hit from Sabrina Sieber.
Barlow followed up with a home run to start the bottom of the third and give GSW a two-run buffer.
GSW scored their final three runs in the bottom of the fourth. Ella Hawkins and Barlow scored off a triple from Tierce and Tierce scored off a single from Martin.
The Lady ‘Canes came home on Feb. 19 to host LaGrange.
A walk-off fielder’s choice put GSW past LaGrange College in game one. LaGrange was leading 2-0 after scoring runs in the first and fourth.
Tierce and Martin hit back-to-back home runs in the sixth to take a one-run lead; Tierce had a two-run homer and scored Barlow.
LaGrange added a two-run homer of their own in the seventh to take a 4-3 lead and put a lot of pressure on GSW’s offense.
In the bottom of the frame, Barlow and Tierce both walked and Martin hit a double to center field to score Barlow and tie the game.
A walk-off fielder’s choice from Denney led the Lady ‘Canes past LaGrange when Tierce scored.
Game two of the series started off strong for GSW with four runs in the first.
Barlow opened with a homer and Tierce, Martin, and Denney followed by scoring runs. Denney hit a home run in the third to give the Lady ‘Canes a 5-3 lead, but Lagrange rallied up in the fifth to tie the score 5-5.
Hawkins scored off a single from Martin and Barlow scored off a sacrifice fly from Denney to take a 7-5 lead in the fifth. Davis scored in the sixth and GSW’s defense held off LaGrange to take the three-run win.
Three days later, the Lady ‘Canes hit the diamond again to take on Albany State at Lady Ram Park in Albany.
McCain hit a grand slam in game one against Albany State to tie the game and help the Lady ‘Canes win 11-10 in extra innings. GSW lost 7-2 in game two to split the series.
Albany State scored in the first off a fielder’s choice and put six more runs on the board in the third off a walk and two hits, including a two-run homer to lead 7-0.
The Lady ‘Canes scored three runs in the fourth to stay afloat. Tierce scored off a single from Davis. McCain scored off a single from Childs and Davis scored off a walk.
Albany State hit another two-run homer in the fourth to lead by six.
McCain hit a double in the fifth to score Tierce and Martin. Then with bases loaded in the sixth, McCain belted a four-run homer to tie the game 9-9. The game went into extra innings and each team scored one run in the eighth to push the game to a ninth frame. Hawkins scored off a single from Martin to take the one-run win.
In the series nightcap, the Lady Hurricanes saw their streak brought to a halt.
Albany State had the first run of the game again in Game 2 off a home run in the second.
GSW tied it right up in the third when Denney hit a double to score Barlow.
Albany State hit two more home runs in the third and hit one more in the fourth to lead 4-1.
McCain hit a single in the fifth to score Sabrina Sieber and Albany State hit a three-run homer to take the five-run win.
The Lady ‘Canes faced Brewton-Parker College in Americus on Feb. 24. The results of this pair of games were not available at press time.
GSW will return to action on March 1, traveling to Carrollton to face West Georgia.