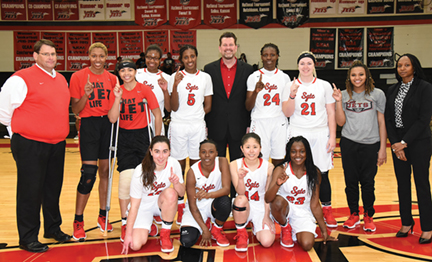 AMERICUS – The South Georgia Technical College (SGTC) Jets and Lady Jets swept Atlanta Metro during Sophomore Day games recently. The Lady Jets opened with a 62-41 Georgia Collegiate Athletic Association (GCAA) conference win over the Lady Trailblazers before the Jets walked away with a 92-69 win over the Trailblazers in the second half of the double-header.
The Lady Jets captured the GCAA regular season title for the second consecutive year and their fourth title in five years. As of this writing, the lady Jets are 13-1 in the conference and 25-4 overall.
The SGTC ladies hosted the first round of the National Junior College Athletic Association District XVII Tournament on Feb. 28. They faced the eighth-place Albany Tech Lady Titans. The results of this match-up were not available at press time.
The top-seeded team after Tuesday night will host the semi-finals on March 3 at 5:30 p.m. and 7:30 p.m. The finals will be held on March 4 at 2:00 p.m.  The Jets have a regular season game at 5 p.m. on March 4 against South Georgia State College.
The Jets moved into seventh place in the GCAA standings with the win over Atlanta Metro. They are now 4-11 in the conference and 10-19 overall.  As the seventh-place team, they could face the second-place team in the NJCAA Region XVII tournament. As of this writing, Gordon College and Central Georgia Tech are tied for second place. The highest seed will host that game on March 7. The Region XVII semi-finals and finals will be held on March 10-11 at the top ranked team’s home location.
SGTC recognized the sophomore members of the Lady Jets and Jets teams in-between the games. The Lady Jets recognized Camille Coleman from South Bend, IN; Desiree Corbin from Griffin; Madison Cameron from Alberta, Canada; and Shaineequah Fluellyn from Molena, GA. The Jets recognized Tre’Von Teague of Cincinnati, OH; Andre Kennedy from Albany; Bobby Jackson from Dacula; Pat Welch from Pembroke, NH; Jordan Bates from Orlando, FL, Derrick Trawick from Milledgeville; and Davion Clark from Dacula.
The Lady Jets were led in scoring by sophomore Fluellyn, who had 19 total points. She shot five of 18 from the field, two of four from the three-point line, and sank seven of eight free throws. She also pulled in six rebounds.
Freshman guard, Trakyra Kid, was the only other Lady Jet in double-figures with 12 points. Kidd also contributed eight rebounds and four assists. Freshman, Esther Adenike, added eight points and 12 rebounds while Marina Balaguer and Kanna Suzuki both accounted for seven points. Sceret Ethridge tossed in five points while Houlfat Mahouchiza and Madison Cameron scored two points each.
The Jets had four players in double-figures. Freshman guard, Mike Boone, was the top scorer with 21 points. Freshman, Marquel Wiggens, added 15 points. Derrick Trawick tossed in 14 points and Jalen Thomas closed out the double-digit scoring with 12 points.