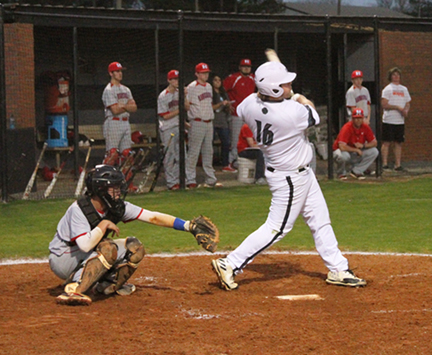 MICHAEL MURRAY I ATR: Schley County’s Clint Sellars follows through after connecting on one of his three hits in the Wildcats’ Feb. 24 tilt against Hawkinsville.

ELLAVILLE – The Schley County High School Wildcats baseball team opened Region 4-A competition on Feb. 24 with a tilt against one of the school’s oldest rivals, the Hawkinsville Red Devils in Ellaville.
The Wildcats got the jump on the Red Devils early in the region curtain-raiser, scoring enough runs in the initial frame to clinch the win. The action didn’t stop there for the Schley crew, however, and the ‘Cats went on to take a 12-3 victory to jump to 1-0 in the region. As of press time, the Wildcats enjoyed a 3-1 overall record on the 2017 season.
Schley’s boys threw four points on the board in the first inning and added three more in the second to take an early 7-1 lead.
Jordan Hall opened with a single, followed by a double off of Will Barry’s bat that hit the left-field fence. Clint Sellars followed with an RBI single. Trent Bivins, pinch-running for Barry, then scored on a passed ball. Sellars scored on a Red Devil error with Chance Holloman at the plate. Cameron Belcher followed, drawing a walk and exploiting an error to complete his round trip.
In the second inning, Reid Ragsdale reached first base on an error and proceeded to steal two bases. Hall was then plunked, sending him to first. Barry offered up a sacrifice fly to deep centerfield, giving Ragsdale plenty of time to come in and Sellars followed up with a base hit to drive in Hall. Wade Law wrapped up the action with a triple that pushed Barry and Sellars.
The following two innings went scoreless for both teams, but the Wildcats got the ball rolling again in the bottom of the fifth. Holloman opened with a single, followed by Cameron Vanlerberghe, who drew a walk. Ragsdale then belted a triple, giving Holloman and Vanlerberghe plenty of time to cross the plate and expand the Wildcats’ advantage to 9-1. 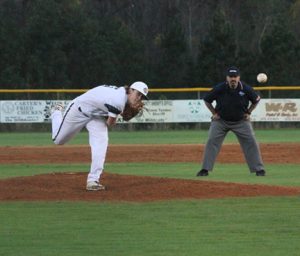 MICHAEL MURRAY I ATR:
Schley County’s Will Barry launches a fast ball down the pipe during the third inning of the Wildcats’ Feb. 24 match-up against the Red Devils in Ellaville.

The Red Devils made their move in the top of the sixth, bringing in a pair of runners with a triple of their own, but a Hawkinsville player attempting a steal was deftly thrown out by Wall from behind the plate to halt their comeback efforts and send the visitors back into the field.
In the bottom of the sixth, Barry opened with a single to left field. Sellars then drew a walk, but was taken out on his way to second when Law blasted a bouncy single down the third-base line. Barry made it to third safely, however, and saw his chance to come home when Hawkinsville’s pitcher tossed an errant attempt at picking off Bivins (pinch-running for Law). Bivins took the opportunity to scramble to second and progressed to third base when Belcher connected on a single.
Holloman then stepped up to the plate and nailed a hard shot deep into centerfield. The ball was caught, but Bivins saw the chance to show off his speed, quickly tagging up and taking off for home plate. Bivins’ score put the Wildcats up 12-3 before the Red Devils returned to the dugout for their last chance at a comeback.
The Hawkinsville crew threatened in their final efforts and managed to get a pair of runners on base, but the Wildcats soon put away the third out, leaving Hawkinsville team members stranded on first and third.
Sellars led the Wildcats from the plate, connecting on three hits in the match. Hall added two hits for the Wildcat cause. Cameron Belcher led the team in walks, drawing two.
Ragsdale and Sellers each brought in two RBIs.
Barry started the game, handling hurling duties for the Wildcats and threw four innings before ceding the mound to Ashton Goodin, who tossed the next two innings. Barry and Goodin each struck out three batters. Dylan Windham took the mound for the final inning.
The Wildcats returned to Region 4-A action on Feb. 28, traveling to Montezuma to test their skills against the Macon County Bulldogs. The results of this test were not available at press time.
Schley will return to their home diamond on March 2, hosting the Crisp County Cougars. The following day, the Wildcats will be hosting a double-header against the Dooly County Bobcats.