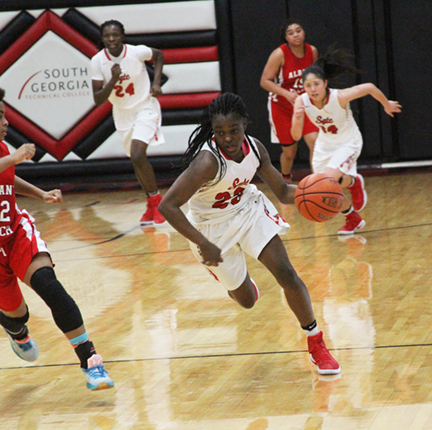 MICHAEL MURRAY I ATR: South Georgia Tech’s Trakyra Kidd barrels her way down the court during the Lady Jets’ Feb. 28 home match-up against Albany Tech. Kidd led the Lady Jets to victory in the first round of the tournament, tossing in 23 points.

The top-ranked South Georgia Technical College (SGTC) Lady Jets captured an impressive 76-43 victory over the eighth-place Albany Technical College Lady Titans on Feb. 28 in the first round of the National Junior College Athletic Association (NJCAA) Region XVII Division I women’s basketball tournament.
As the Georgia Collegiate Athletic Association (GCAA) regular season champions, the Lady Jets earned the right to host the first round of the NJCAA Region XVII tournament. After the win against Albany Tech, the SGTC team earned the right to host the semi-final and final rounds on March 3-4.
The first game was held on March 3 with the second-ranked Georgia Highlands team facing off against the third-ranked East Georgia State squad. The first-place Lady Jets then faced off against fourth-ranked Chattahoochee Tech. The results of this match-up were not available at press time.
The two winners will meet in the finals at 2:00 p.m. on March 4.
This is the second consecutive GCAA regular season conference title for the Lady Jets and their third in five years. Lady Jets head coach, James Frey, was recently selected as the GCAA Co-Coach for the Year for the 2016-2017 season. This is the third time Frey has received this honor in five years.
Freshman guard, Kanna Suzuki, was recently selected as the Freshman Player of the Year while sophomores Camille Coleman, Desiree Corbin, and Shaineequah Fluellyn were each named to the GCAA All-Conference teams.
According the most recent NJCAA poll, released Feb. 28, the Lady Jets have jumped to 16th-place nationwide.
“We are obviously appreciative of the number 16 ranking,” said Frey. “I think it is a testament to our athletes’ work ethic, not just this year, but in years past. I think we have attained a pretty good level of respectability nationwide because of our consistency year in and year out. Our young ladies also understand we have a lot of work to do to improve. While appreciative of the ranking, we will not become complacent and let up. We have to finish the drill now.”
“We are happy to get the win and host the final four this weekend,” Frey continued. “I think our young ladies stayed the course and remained focused through a lot of adversity and it is paying off now. We have told our entire team all year that you have to prepare as though you are starting because in sports, the unexpected often happens.” 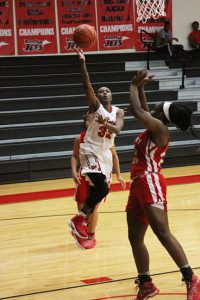 MICHAEL MURRAY I ATR:
SGTC’s Shaineequah Fluellyn takes it to the bucket during the first round of the NJCAA Region XVII tournament in Americus. Fluellyn was recently named to the GCAA All-Conference team.

“It just so happens this was our year for the unexpected,” added Frey, who lost three starters late in the season due to injuries and personal situations. “We have young ladies who were playing very little early on, who are now playing 20 minutes a game and giving us great effort. There is a lot of pride in that locker room and I think it is showing in how they are going about their business.”
SGTC scored first against Albany Technical College and never relinquished that lead in the first-round tournament action. The Lady Jets were up 21-8 at the end of first quarter and were still up by 13 points at the half with the score 38-25.
The Lady Jets dominated in the second half as well, outscoring Albany Tech 16-9 in the third quarter and 22-9 in the final period to capture the 33-point victory.
Freshman guard, Trakyra Kidd, led the Lady Jets in scoring with 23 points. Kidd hit 10 of 11 shots from the field and three of five from the foul line. The 5’ 7” guard led both teams in rebounds with 12. Kidd also dished out five assists.
Fluellyn, a sophomore guard, accounted for 14 points and four rebounds while Suzuki, a freshman guard, closed out the double-digit scoring with 12 points. Suzuki also contributed five rebounds and five assists.
Marina Balaguer, a freshman guard, came off the bench and added nine points. Madison Cameron, a sophomore forward, added eight points and then Houlfat Mahouchiza, a freshman forward, accounted for six.  Secret Ethridge added three points and Esther Adenike closed out the scoring with one.
“We now have to prepare for Chattahoochee Tech, who has had a wonderful season,” said Frey, following the win. “They have two all-conference performers and honestly probably should have had a third. They have three of the leading scorers in our conference and the leading rebounder. They can shoot the three-point shot as good as any team I have seen in my five years here. The key for us is going to be defending the three-point line and taking care of the basketball. If we do those things, I think we have a chance.”
Chattahoochee Tech entered the contest 21-10 overall and 5-9 in the conference. They defeated Central Georgia Tech 77-75 in the first-round playoff on Tuesday. In the other bracket, the second-seeded Georgia Highlands Team defeated Andrew College, 57-53. Georgia Highlands entered Friday’s competition 18-13 overall and 12-2 in the conference. They faced East Georgia State, who defeated Atlanta Metro, 87-64 in first round action. East Georgia State entered the contest with an overall record of 20-7 and a conference record of 10-4.

A word from Sumter Cycling: Annual meeting to be…