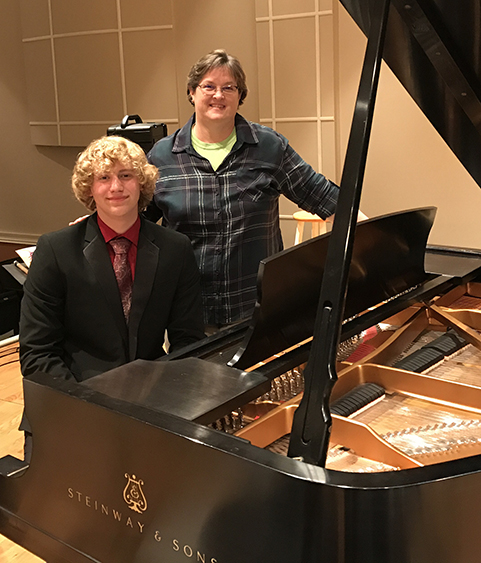 Kalman DeMott, shown seated at the piano, has been named STAR Student at Americus-Sumter High School, and chose Debra Hughes, shown standing, as his STAR Teacher.

AMERICUS — High School senior Kalman DeMott has been named as the Americus-Sumter High School (ASHS) 2017 PAGE STAR Student. DeMott chose Debra Hughes, ASHS band director, to share in the award as his STAR Teacher.
The PAGE Student Teacher Achievement Recognition (STAR) is sponsored, administered and promoted by the Professional Association of Georgia Educators (PAGE). Since its creation by the Georgia Chamber of Commerce in 1958, the STAR program has honored nearly 26,000 students and teachers. In order to qualify tor STAR nomination, high school seniors must have the highest score on a single test date on the SAT and be in the top 10 percent or top 10 students of their class based on grade point average.
Each year the participating Georgia high schools names a STAR Student who then chooses a STAR Teacher to share in this recognition. The students and their teachers are honored by their schools and receive special recognition in their communities from one of the more than 165 statewide civic organizations and businesses that serve as local sponsors of the STAR program. Students then compete for school system recognition as the top STAR Student, and those winners compete for region honors. Region winners contend for the honor of being named State PAGE STAR Student. STAR Teachers continue to mentor their STAR Students at every level of the program.
DeMott stated he is honored to represent his school in such a notable way.
“It has taken a lot of hard work to get where I am,” he said, “and I’m proud to accept the STAR honor for ASHS. I’m thankful for everyone who pushed me to work so hard, especially Ms. Hughes who has guided me so well, taught me so much.”
Hughes expressed her pleasure for being chosen by DeMott as his influential STAR Teacher.
“I am so thankful for this honor of being selected as Kalman’s STAR Teacher. To have a student recognize me for having an impact on their academic achievement is the highest honor I could ever receive as a teacher. Kalman DeMott has been a pleasure to teach, and I am so thankful to had an opportunity to work with him. He is very self-motivated and determined to achieve his goals.”
“We are very proud of Mr. DeMott and Ms. Hughes and the academic excellence they exemplify at Americus-Sumter High,” said Kimothy Hadley, principal of ASHS.
The Professional Association of Georgia Educators honors outstanding students and educators and encourages academic excellence through competitive academic initiatives such as PAGE STAR, the PAGE Academic Bowl for Middle Grades and the PAGE Georgia Academic Decathlon.