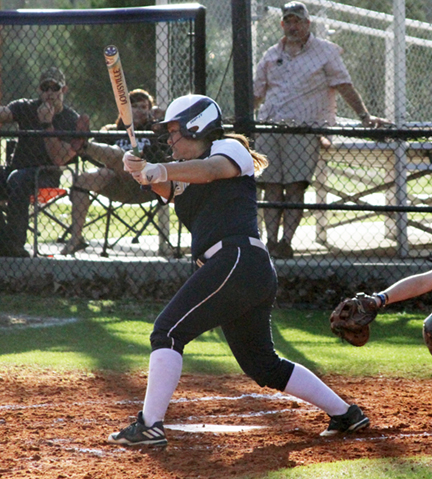 MICHAEL MURRAY I ATR: GSW’s Sabrina Sieber follows through after hitting thhe ball in an early-season test in Americus. Sieber connected on three of four hits in the Lady ‘Canes’ series opener against Fort Valley State.

FORT VALLEY – Georgia Southwestern State University (GSW) softball Head Coach, Eddie Ward, captured his 300th career win on March 5 when the Lady ‘Canes swept Fort Valley State at Wildcat Stadium.
The Lady Hurricanes opened with a 12-1 thrashing of the Lady Wildcats before closing out the afternoon with a five-inning 8-0 shutout of their hosts.
With the pair of wins, GSW jumps to 12-10 overall on the 2017 season.
The Lady ‘Canes jumped ahead early in the Sunday opener.
Hayley Tierce kicked off the scoring with a double to score Mikela Barlow early in the first frame to take a one-run lead. Fort Valley State tied it up in the bottom of the first off an error.
The Lady ‘Canes came back with a huge second inning, connecting on six hits and scoring seven runs. Barlow hit a two-run single to score Sabrina Sieber and Emily Smith. Graysen Sanders and Barlow then scored off an error by the right fielder before Tierce came in off a single from Joshlyn Martin. Martin completed her round trip off a single from Sieber and Hannah McCain scored off a single from Sanders.
GSW scored four more runs in the third to take an 11-run lead. Ella Hawkins crossed the plate after a single from Allee Denney before Tierce did the same off a single from Martin. Denney followed with a run off a single from Sieber’s bat and Martin came in after Sanders connected on a base hit.
GSW’s pitching staff held off Fort Valley State and were able to close out the game in five innings.
Sieber was three-for-four at the plate while Tierce and Sanders were two-for-three.
GSW finished with 13 hits and one error.
Shannon Gibson (W, 3-3) pitched five innings, facing 19 batters and striking out 10. Gibson scattered three hits and one run.
The Lady Hurricanes continued their fierce competition in the afternoon’s closer.
Sanders singled in the second stanza to bring in Denney and hop on the board first. The game was quiet until the fourth when GSW pushed six players across the plate to take a seven-run lead.
Sanders kicked off the rally with a two-run double, plating McCain and Brittany Davis. Hawkins followed with a two-run triple to bring in Sanders and Smith. Barlow then added a triple of her own to score Hawkins before Tierce offered up a sacrifice fly to bring her in.
McCain put the final mark on the board off a single from Rebekah Davis in the fifth and GSW’s defense held off Fort Valley State from scoring anymore runs to take another five-inning win.
Sanders was two-for-three at the plate.
GSW finished with eight hits and no errors.
Brittany Childs (W, 6-2) recorded her first shutout of the season. Childs faced 16 batters, struck out eight, and gave up one hit.
The Lady ‘Canes are home on March 9 in a non-conference doubleheader against Palm Beach Atlantic, beginning at 12:00 p.m.