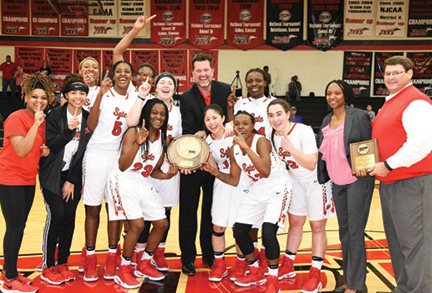 AMERICUS –  Sophomore guard, Shaineequah Fluellyn, scored 32 points to lead the nationally-ranked South Georgia Technical College (SGTC) Lady Jets to the National Junior College Athletic Association (NJCAA) Region XVII Championship on March 4 in a narrow 65-63 victory over former Lady Jets head coach, Brandon Harrell, and his Georgia Highlands Lady Chargers from Rome.
This is the fourth consecutive time that the Lady Jets have been in the championship game under head coach, James Frey, in his five years at SGTC. It is also the third time in four years that the Lady Jets have clinched the title. Coach Frey’s Lady Jets defeated Coach Harrell and Georgia Highlands in 2013-14, upset Darton College in 2014-15, lost to Georgia Highlands in 2015-16, and came back and defeated Georgia Highlands in the championship this season. The win allowed the Georgia Collegiate Athletic Association (GCAA) regular season champion Lady Jets to advance one step closer to reaching the NJCAA Division I Women’s national tournament.
The Lady Jets will host the NJCAA Region X champion Denmark Tech team from Denmark, SC, on March 11 at 2:00 p.m.in the Hangar for the NJCAA District J title. The winner will advance to the Division I women’s NJCAA national tournament in Lubbock, Tx., March 20-25. Each District champion earns an automatic bid and eight at-large teams from around the nation will receive bids.
Denmark Tech was the top team from Region X which includes North Carolina, South Carolina, Virginia, and South West Virginia. The South Georgia Tech Lady Jets are now 28-4 and Denmark Tech is 11 – 9.
“I can’t tell you how proud I am of this team,” said Frey after his team battled a very strong Georgia Highlands team to capture their second NJCAA Region XVII title in three years.
“This game was everything that a championship game should be,” Frey continued. “There were 11 lead changes and five ties throughout the 40-minute contest. The Lady Chargers had the ball in the final seconds of the game, but our defense kept them from getting off a last second shot before the buzzer sounded.”
Frey kept praising his team which has overcome injuries and adversity during the last month and a half of the season. “We lost three starters late in the season due to injuries and personal situations but our young ladies stepped up and stayed the course to get us to this point. We set our goals to win the GCAA regular season, the NJCAA Region XVII tournament and now we have to win Saturday to realize our goal of becoming the District J champions and having the honor to compete in the NJCAA National Tournament again.” The Lady Jets went to the national tournament in 2013-14 and 2014-15.
Sophomore center, Desiree Corbin, was one of the two injured starters. Corbin has missed the last two weeks with a hairline fracture of her knee. She was able to come back and play in the semi-final and final games of the tournament.
Fluellyn made the difference in the tournament, contributing 32 points, two rebounds, two assists and three steals to lead the team. She went down with an ankle injury before the half, but came back in the second half and scored another 23 points.
Fluellyn also scored 18 points in the semi-final game against Chattahoochee Tech and had 14 points and four rebounds against Albany Tech in the first-round game. “She definitely stepped up and provided the leadership on the court and the scoring threat that we needed to win the tournament,” said Frey. “I am so proud of her.”
Esther Adenike was the only other Lady Jet in double figures in the game with Georgia Highlands. Adenike contributed 12 points and seven rebounds. Houlfat Mahouchiza tossed in six points and pulled in three rebounds while Marina Balaguer accounted for five points and had three rebounds. Trakyra Kidd scored four points.
Kanna Suzuki and Secret Ethridge both added three points to round out the scoring for the Lady Jets in the championship game.
“Now we have to get ready for Denmark Tech,” said Frey. The Lady Jets played Denmark twice early in the season and won, 93-54 and a 78-63 in the November tilts. “We are both different teams since those first meetings. We have to work hard this week and concentrate on doing all the right things to put ourselves in the position to win on Saturday.”