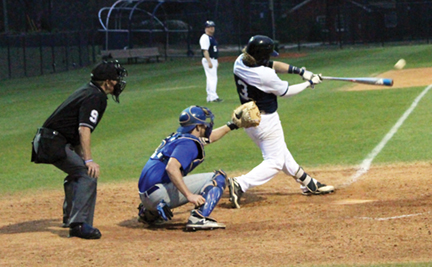 MICHAEL MURRAY I ATR: GSW’s Zach Barron belts a two-run dinger to tie the score 5-5 in the bottom of the fourth during the Hurricanes’ March 7 test against Albany State. .

AMERICUS – The Georgia Southwestern State University (GSW) baseball team rallied from four runs down in the fifth inning to take a lead in the eighth, only to have Albany State University (ASU) answer with five runs late in the game and hand the Hurricanes a 10-7 loss in 10 innings on March 7 at Hurricane Stadium in Americus.
GSW fell to 7-12 this spring while Albany State (1-13) picked up its first win of the year.
The Golden Rams entered the week averaging 4.8 hits per game with a .161 team batting average. The visitors tallied 14 hits on Tuesday.
GSW fell behind 2-0 after Albany State scored a run in the first inning and another in the second. Jonathan Martin cut the deficit in half as he led off the third with a triple and scored on the play off an errant throw into third base. Albany State got that run back in the fourth when a two-out passed ball allowed Theo Smith to score from third. The Golden Rams extended their lead to four runs when they tacked on two more in the fifth.
That’s when the Hurricanes’ offense came to life. Alex Kranick singled to open the home half of the fifth. Evan Alderman then reached on an error and Will Redding followed with a single to load the bases. Jared Jones brought home a run on a fielder’s choice and Dakota Long plated Alderman with a sacrifice fly to left field. Zach Barron capped off the four-run inning with a two-run homer to left field and GSW had tied the game at 5-5.
Andy Moore gave the Hurricanes their first and only lead of the night in the eighth inning with an RBI single.
After Albany State scored a pair in the top of the ninth, GSW rallied once again as Kranick scored from first on a single by Redding with the aid of a throwing error in the outfield to force extra innings.
The Golden Rams delivered their knockout blow with three runs in the 10th.
Kranick and Redding finished with two hits apiece to lead GSW’s batters.
Hurricane starting pitcher, Jarrod Crum, threw four innings, allowing three runs – one earned – and five hits. Crum walked one batter and struck out three. Drew Powers tossed an inning of relief and was charged with a pair of unearned runs. Coty Graham threw two scoreless frames and Lawson Stewart added a scoreless inning. Mitch Holloway (2-1) was unable to secure the save and took the loss after the Golden Rams scored three in the 10th.
GSW resumes Peach Belt Conference play Saturday against Francis Marion University. First pitch of the three-game series opener is scheduled for 1:00 p.m. at Hurricane Stadium.