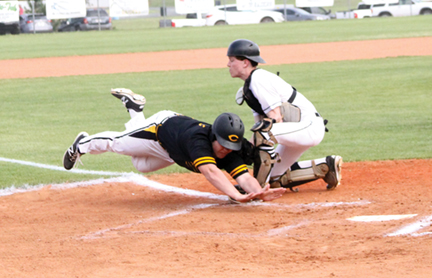 MICHAEL MURRAY I ATR: Southland’s George Wall tags a Crisp Academy runner diving into home plate during the first inning of the Raiders’ March 7 home opener against the Wildcats.

AMERICUS – The Southland Academy Raiders baseball team kick off their home competition on March 7, hosting the Crisp Academy Wildcats in what would turn out to be an exciting match-up from both sides of the stands.
The Raiders pulled ahead by three runs early in the home opener and the teams continued to duke it out until the top of the seventh, when the Wildcats sparked a rally that ended up tying the score 3-3. The Raiders made a strong effort to put the game away in the bottom of the seventh, but the Crisp crew held fast, forcing the game to be declared a tie, as there was not enough daylight to facilitate extra innings.
The Raiders previously dropped a tough decision in their season opener to Tattnall Square Academy in Macon on March 4. On March 8, the Raiders traveled to Camilla to earn an 8-2 victory over the Westwood Wildcats. Following this series of match-ups, the Raiders jump to 1-1-1 overall.
The Raiders got off to a strong start in the March 7 test of their skills with pitcher, Michael Hudgens, striking out Crisp’s initial batter. The Wildcats’ second batter’s shot was deftly caught by Southland centerfielder, Clay Owens, before the third man up to the plate was hit by a pitch and sent to first base. 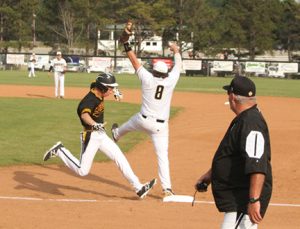 MICHAEL MURRAY I ATR:
Southland’s Stephen Barnes reaches up to snag a toss from Harrison Bell just in time to put away a Crisp Academy runner headed for first base..

Crisp’s fourth prospective batter knocked a hard shot into left field and the visitors’ man on first was nearly able to score. The Wildcats’ hopes of an early lead were dashed, however, when the runner was tagged out sliding into home by Southland catcher, George Wall.
Southland got the ball rolling in the bottom of the first when Will Hubbard drew a walk and then made his way to second on a Harrison Bell single. Both runners advanced on a passed ball before Hunter McCain belted a single of his own to plate Hubbard and put the Raiders up 1-0. Hudgens followed with a single to load the bases before Wall offered up a sacrifice grounder to bring in Bell, giving the Raiders a two-run advantage.
It was three up, three down in the top of the second, as the Raiders promptly dispatched a trio of Wildcat batters to return to the dugout.
Crisp Academy quickly racked up two outs before Owens saw the opportunity to take off for first base on a wild pitch. Hubbard then exploited a Wildcat error to make his way to first base as Owens took off for third. Bell then reached, thanks to a missed throw at first base, giving Owens the chance to tag home plate and put the Raiders up 3-0.
The game went quiet for the following four innings, as both teams tightened up their defensive play.
In the top of the seventh, a Crisp batter opened with a single, followed by a double from batter number-two that put the Wildcats within striking distance. The third batter in Crisp’s lineup reached on a Southland error, plating their first runner of the game. Hubbard, now on the mound for the Raiders, struck out two batters in succession before Crisp’s sixth batter in the line-up nailed a hard double, bringing in both base runners. The Raiders were able to stop the bleeding with an out at first base on Crisp’s follow-up attempt.
Determined not to let the game end without a clear victor, the teams quickly prepared to go into an eighth inning, but the officials determined that there would not be sufficient time after the first pitch and the game was called at 3-3.
McCain set the pace for the Raiders in the tilt, contributing one hit and one RBI to the draw. Bell and Hudgens each connected on hits in the match and Wall batted in one run. Hubbard drew the Raiders’ only walk of the match. In total, the Raiders collected three hits, while holding the Wildcats to only two.
Hudgens dominated the mound for five innings for the Raiders, facing 17 batters and striking out six. Hudgens gave up one walk.
Hubbard struck out four batters and gave up one walk and two hits during his two-inning stint of relief.
The Raiders return to action on March 14, traveling to Damascus to take on the Southwest Georgia Academy Warriors.