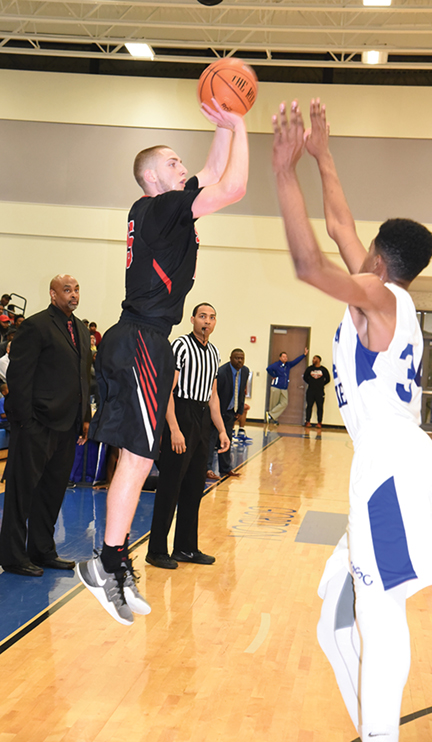 SUBMITTED BY SGTC SGTC’s Pat Welch sank the winning three-point basket with 6.8 seconds left to allow the Jets to upset the Gordon College Highlanders in the first round of the NJCAA Region XVII tournament on March 7.

BARNESVILLE – South Georgia Technical College (SGTC) sophomore guard, Pat Welch, drained a three-point shot with 6.8 seconds remaining in the game to lift the seventh-ranked Jets to a 76-74 upset victory over the second seeded Gordon State College Highlanders in the first round of the National Junior College Athletic Association (NJCAA) Region XVII Tournament in Barnesville on March 7.
In the Jets’ final regular-season match against South Georgia State, Jalen Thomas and Welch had previously  teamed up to score 44 points and lead the team to an impressive 83-78 victory.
The Jets advanced to the NJCAA Region XVII Final Four round at Georgia Highlands College in Rome on March 10.  South Georgia Tech faced the Albany Tech Titans. Albany Tech upset the third-ranked Central Georgia Tech team 78-66 in their first-round game. The top-ranked Georgia Highlands squad rolled over the eighth-seeded East Georgia State team 103-68 to earn the right to host the semi-final and final rounds.  They will play fourth seeded South Georgia State at 7:30 p.m. on March 10 in the other semi-final round.  South Georgia State defeated Chattahoochee Tech 98-86 to earn the right to advance.  The two winners will meet in the finals on March 11 at 2 p.m. in Rome.
“This was a great win for the Jets,” said Jets head coach, Travis Garrett. “We have battled through a lot of adversity this year. It was good to see the joy in these players’ eyes when Pat Welch made the game winning shot to put us ahead by two points with less than seven seconds remaining in the game.”
The Jets were down by six points with 1:47 seconds remaining in the game. Thomas hit a three-point shot from the corner with 1:34 on the clock to lift the Jets to within three points at 74-71. The Jets’ defense stopped Georgia Highlands from scoring on their next possession and Andre Kennedy went in strong under the basket for two to narrow Georgia Highland’s lead to 74-73 with 1:03 left on the clock. The Jets continued to work hard and deny Georgia Highlands the opportunity to score in the entire final two-minutes.
The score was tied nine times and the lead changed 14 times during the 40-minute contest. SGTC had a six-point lead early in the first half and then Gordon came back and had a six-point lead with 1:48 left in the game. SGTC rallied to overcome that deficit and pull ahead by two points for the win.
“I am so proud of the effort that our players put up last night. This was a great win for us. We have won the last four consecutive games and five of our last six games. Our only loss in the last six games was to Gordon by the score of 75-63. When we pulled within one point in the final minute, I thought we were in a good position to win,” said Coach Garrett. “Andre Kennedy and Jalen Thomas had great games and gave us a lift throughout the course of the game. I told the guys at half time that we will not get another chance to achieve our goal if we can’t pull this game out. We did what we needed to do…”
South Georgia Tech defeated Albany Tech 90-84 in Albany on Feb. 25 and had beaten them in January in Americus but had to forfeit that game due to an ineligible player. As of press time, the Jets were 12-19 overall and finished the regular season conference play with a 5-11 record. Albany Tech entered the contest 6-10 and 12-19.
Kennedy led the Jets in scoring with 26 points. He hit 12 of 22 shots from the field and went 2 -2 from the foul line. He had 14 points at the end of the first half and added 12 more in the second.  He also cpntributed nine rebounds and two assists.
Thomas was the only other Jet in double-figures. He had 17 points including two three pointers. He also contributed two rebounds, five assists and two steals.
Welch had a total of nine points on the night, including the game-winning basket. He was three of 10 from the three-point line and contributed two rebounds and three assists. Marquel Wiggins tossed in seven points. Bobby Jackson and Davion Clark both added six points each and then Mike Boone closed out the scoring with five.
“I just can’t thank everyone enough for making that trip to Barnesville,” said Garrett. “The support we received last night was huge. I know my guys truly appreciated seeing the fans when they walked out on the court and it made a difference in the way they hustled.”
The SGTC Lady Jets will be playing at home on March 11 at 2:00 p.m. for the NJCAA District J title and the opportunity to advance to the NJCAA National Tournament in Lubbock, Texas, March 20-25. The NJCAA Men’s tournament will be held at the Hutchinson Sports Arena in Hutchinson, KS on March 20-25. The winner of the NJCAA Region XVII Division I men’s tournament will get an automatic berth in the national tournament.