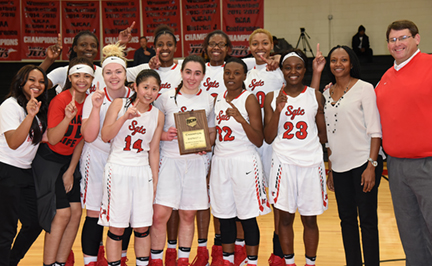 SUBMITTED BY SOUTH GEORGIA TECHNICAL COLLEGE: Shown above are the Lady Jets holding up their NJCAA District J plaque after defeating Denmark Tech and earning the right to advance to the NJCAA National Tournament in Lubbock, Tx., March 20-25.

AMERICUS – The South Georgia Technical College (SGTC) Lady Jets earned a trip to the National Junior College Athletic Association (NJCAA) Division I women’s basketball national tournament after soundly defeating Denmark Tech from Denmark, S.C., 91-58 on March 11 in the NJCAA District J championship game at the Hangar in Americus. The National Tournament will begin March 20 in Lubbock, Texas. The Lady Jets will face Motlow State in the first round of the National Tournament.
This will be Coach James Frey’s third trip to the national tournament in four years as well as his third in five seasons as the head women’s coach at SGTC. Frey has managed to put together 20-plus winning records in each of his five seasons as the head coach of the Lady Jets. His record at South Georgia Tech is 134-34. He has won three GCAA Conference titles, three NJCAA Region XVII tournament and three NJCAA District J championships and has been named GCAA Coach or Co-Coach of the Year three times.
Assistant Coach, Kezia Conyers, has been with Frey and the Lady Jets for four seasons and will also be making her third trip to the National Tournament. She has been a part of 114 of those 134 wins and has only been a part of 22 losses in her four seasons.
“This was unbelievable,” said Frey. “This has been a season that I will always remember. People really counted us out after we lost three of our starters late in the season. Nobody thought we could finish the drill, but our ladies stepped up and did what they had to do. I am so proud of these young ladies and the effort that they have given me all season long.”
That 91-58 victory allowed the Lady Jets to pull within one game of the Lady Jets all-time winningest season record of 30-5. They are currently 29-4. The 30-5 record is also the best record ever posted by the Jets or the Lady Jets. In the past two trips that the Lady Jets have appeared in the NJCAA National Tournament, they finished with a Sweet 16 ranking and an Elite Eight ranking. The Lady Jets advanced to the national tournament one other time under former head coach Brandon Harrell, who is now the head coach at Georgia Highlands. The Lady Jets defeated his team by two points in the NJCAA Region XVII tournament to advance to the District J tournament.
The Lady Jets started this season with only one player returning from last season and they finished the season with no returning players after being plagued by injuries and personal situations. Starting sophomores, Camille Coleman and Desiree Coleman, both sustained injuries late in the season, which left Coach Frey starting four freshman and one sophomore. Coleman tore an ACL late in the season and had surgery. Corbin had a hairline fracture on her knee and was out two weeks before returning for the NJCAA Region XVII and District J tournaments. 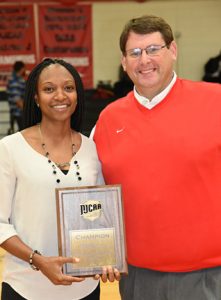 “This was a total team effort,” said Frey. “Everybody did what they had to do to help us win. And we are going to need that same type of effort at the national tournament.”
Marina Balaguer was the leading scorer in the Denmark Tech contest with 19 points. Baulger was five of 10 from the three-point line and two of two from the field. She also had two rebounds and four assists. This was her best performance this season.
Shaineequah Fluellyn accounted for 16 points in less than 30 minutes of play. She was the MVP for the Lady Jets in the NJCAA Region Tournament the previous week, and continued to lead the team last week. All 16 of her points came in the first half when the Lady Jets built a 53-25 lead.
Houlfat Mahouchiza added 14 points and eight rebounds in that effort and freshman guard, Trakyra Kidd, closed out the double-digit scoring with 10 points.
Every member of the Lady Jets scored in that game. Corbin came off the bench to score nine points. Freshman guard, Kanna Suzuki, had eight points. Freshman, Esther Adenike, added six points. Sceret Ethridge posted five points and Madison Cameron closed out the scoring with four.
“This was a big win, but now we have got to start thinking about the National Tournament,” said Frey. It is a single game elimination from here on out. Our goal this season was to get to and win the National Tournament. We have accomplished half of that goal, now we will really have to play to accomplish the second half.”
The Lady Jets received their first votes to be included in the NJCAA Top 25 rankings earlier this season and were seeded in 24th place. They have moved up to number 16 in the final poll and Coach Frey is hoping to be ranked even higher in the tournament rankings.
The top eight teams will receive a bye in the National Tournament which begins March 20 at 10:00 a.m. in the Rip Griffin Center in Lubbock, Tx. Only the top 24-teams in the nation have the opportunity to advance to the national tournament.
The 16-teams that earned the right to advance by winning their regions or districts include: Cochize (AZ), 27-3; Northeastern Oklahoma A&M, 28-2; Monroe College (NY), 21-6; North Dakota SCS, 30-3; Odessa (TX), 28-1; Hutchinson (KS), 33-1; Walters State (TN), 25-6; Gulf coast State (FL), 30-2; Western Nebraska, 28-4; South Georgia Tech, 29-4; Iowa Western, 24-8; Trinity Valley (TX), 27-5; Salt Lake (UT), 28-4; Shelton State (AL), 30-2; Jones County (MS); 27-1; and Wabash Valley (IL), 31-1.  The eight teams that received an at-large selection bid to round out the 24 teams include:  Harford (MD); 28-3; South Plains (TX), 27-5; Seward County (KS), 31-2; Motlow State (TN), 27-5; Chipola (FL), 27-4; Tallahassee (FL), 23-7; San Jacinto-North (TX), 24-8; and Tyler (TX), 24-8.