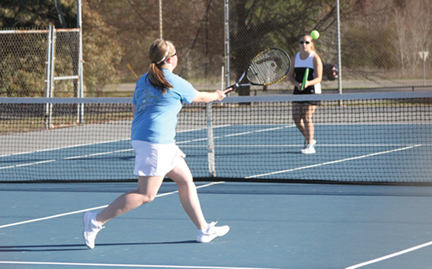 MICHAEL MURRAY I ATR: Southland’s Susanna Fowler returns a volley during a March 10 match against Crisp Academy in Americus.

Southland Academy’s tennis teams have been very busy since the 2017 season began.
On March 6, Southland’s Riders and Lady Raiders traveled to Thomasville to take on the Brookwood Warriors and Lady Warriors.
Southland’s tennis teams fell in their first tournament of the week, but the experience gleaned in the match-ups proved fruitful for the Americus team.
The following afternoon, Southland’s tennis teams returned to their home court to battle the Tiftarea Panthers and Lady Panthers.
In the March 7 match-ups, both Southland teams swept their opponents by 5-0 margins.
In boys’ action, Southland’s Jeremy Ledger won both of his tilts (7-5, 6-3) against Tiftarea’s Austin Wiggins. Gray Torbert defeated visitor, Jacob Cook (6-1, 6-3), and Davis Comer took down Davis Hames (6-4, 7-5).
In the boys’ doubles matches, Southland’s Chance Westra and Sam Copland took down their opponents 6-1 and 6-3 while Bradley Kitchens and McCartney Cummins completed a near-shutout of their Tiftarea foes, 6-1 and 6-0.
The Southland girls saw similar success in the meet against Tiftarea, with Ana Coloma-Arias blanking Abbey Carswell 6-0 and 6-0. Southland’s Mary Martin Shealy followed with 6-1 and 6-3 defeats of Tiftarea’s Anna Cook. Scout Davis completed the Southland singles sweep by defeating her opponent 6-1 and 6-3.
The doubles team of Morgan Jones and Susanna Fowler initially split a decision with their Tiftarea opponents, but returned to take a 7-4 win in the tiebreaker. The team of Maddy Copeland and Sarah Bass defeated their foes in both matches, 6-2 and 6-4.
On March 8, the Raiders and Lady Raiders hosted the Crisp Academy Wildcats and Lady Wildcats, bringing in another pair of victories for the Americus school. The Raiders defeated their Crisp counterparts by a margin of 4-1 before the Lady Raiders took the court to take down the Lady Wildcats 5-0. 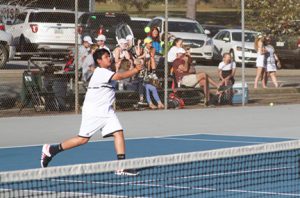 Ledger got the ball rolling for the Raiders with an 8-2 defeat of Kaleb Spires. Torbert followed with an 8-3 win over Dillon Easterlin and Shubh Patel closed out the Raiders’ singles wins with an 8-4 defeat of Cameron Brown.
The doubles team of Kitchens and Cummins won their match 8-4 and the team of Westra/Copland took an 8-5 defeat in the afternoon’s final test.
The Southland ladies, once again, blanked their opponents, with Coloma-Arias leading the way with an 8-0 win over Olivia Folds. Shealy kept the momentum up with an 8-3 win over Bailey Manning. Davis wrapped up the Southland ladies’ singles action with an 8-1 win over LauraLynn Cook.
The doubles team of Jones/Fowler took down their visiting opponents 8-2 as Copeland and Bass were blanking their neighboring rivals, 8-0.
The Southland tennis teams returned to the court in Buena Vista on March 13 to face Marion County. On March 14, the teams returned to their home court to take on Deerfield-Windsor. The results of these match-ups were not available at press time.
Southland’s tennis teams will return to action on March 15, hosting Glenwood Academy.