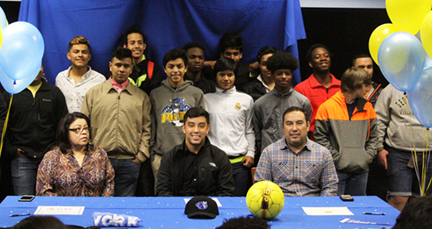 MICHAEL MURRAY I ATR: ASHS’ Jonathan Abarca, center, prepares to sign his scholarship agreement with York College during a signing ceremony in Americus. Abarca is seated between his parents. Members of the ASHS Panthers soccer team are standing in the background.

AMERICUS – Americus-Sumter High School (ASHS) soccer standout, Jonathan Abarca, signed a letter of intent to take his athleticism to the next level on March 14.
In a signing ceremony in the ASHS media center, Abarca signed a full scholarship agreement to play soccer for the York College Panthers, in York, Nebraska following his graduation this year.
Abarca has been playing soccer for the ASHS Panthers all four years of his high school career, but his story doesn’t start there. In a brief interview with the Times-Recorder prior to the ceremony, Abarca stated “I started playing soccer at the age of five. It’s something that runs in the family.” He went on to say that he has been playing travel soccer for several years, an experience which has allowed him to hone his skills in matches all over the state, against some very high levels of competition. He concluded, saying that he intends to continue playing soccer for the rest of his life.
Abarca’s father, Juan Abarca, who organizes the Americus Soccer League each summer, helped instill in his son his love of the game.
In his sophomore and junior years playing for the ASHS Panthers, Abarca was nominated First-Team All-Region. He was also selected to play in the high school All-Star games during these years.
On his decision to sign on with York College, despite receiving offers from several other schools across the Southeast, Abarca told the Times-Recorder, “It all started because a coach of mine, on the travel team, did a scout profile for me. He put up my highlight reels and everything. Out of nowhere, one day… they sent me an email, right away, saying that they love the way that I play and the sportsmanship that I [show] on the field… Everything that I do for my team. They said that and made me the offer. York has been catching my eye for the last couple of months, so I think that it will be a great decision for me in the future.”
Abarca stated that he intends to pursue courses of study in physical therapy and athletic training while at York College. “I want to be a part of the medical field and still take part in the sports,” he added.
ASHS assistant principal and co-athletic director, Todd Vickery, welcomed the crowd gathered at the ASHS media center to begin the ceremony.
“Today is a celebration for Jonathan Abarca as he signs his letter of intent to continue his soccer career at the next level,” Vickery stated. “He’s a Panther now, and he will be able to remain a Panther at York College…”
“Jonathan will be going far away from home. No quick trips home on the weekend,” Vickery joked before continuing, “To be able to play any sport in athletics at the collegiate level, is quite an accomplishment. The time and practice and the miles on the road, going from here to there to play… takes commitment, discipline, and responsibility. Not just any one can do this. It has taken a great deal of commitment on Jonathan’s part and it’s just such a blessing to be able to continue something that you’re this passionate about and be able to continue to play soccer.”
Before signing the papers, Abarca addressed the eager crowd. He began by thanking “The Big Man above”, as well as his teammates and family members for their continued support over the years. Abarca also thanked several of his current and former teachers for their encouragement.
“Words can’t explain how thankful I am for everybody that God has put in my life because, if it wasn’t for each one of you guys in this room right now, I wouldn’t be the person that I am today,” he said. “I’m thankful for each and every one of you guys. I love all of you…”