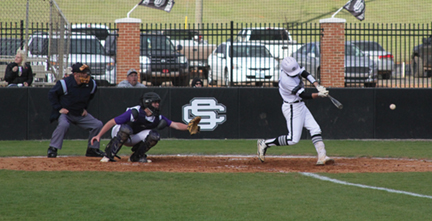 MICHAEL MURRAY I ATR: Schley County’s Jordan Hall belts a single past second base during the third inning of the Wildcats’ March 14 match-up against the Crawford Eagles. Hall contributed three hits to the Wildcat victory.

The Schley County Wildcats baseball team saw their second defeat of the 2017 season in a March 9 non-region match-up against the Deerfield Windsor Knights, in Albany. In a bitter, back-and-forth slugfest, the Wildcats eventually succumbed 13-12 to the Knights.
The loss wouldn’t keep the Wildcats down for long, however, as the team resumed Region 4-A competition on March 10 with a 4-0 defeat of the Marion County Eagles thanks, in part, to a stellar performance from the mound by Schley’s Chase Patrick, who logged 14 strikeouts in 14 innings of work.
Following this short road stint, the Wildcats returned to their home diamond on March 14 to battle the Crawford County Eagles, another region opponent, whom the Wildcats soundly defeated. Riding the wave of momentum from an early two-run homer off of Will Barry’s bat, the Wildcats were able to wrap up the game in four and a half innings with a 10-0 victory.
Following this series of matches, the Wildcats left the field 10-2 overall and are undefeated in Region 4-A after seven games.
The Schley crew took on the Brookstone Cougars on March 17. The results of this face-off were not available at press time.
The high-scoring match between the Schley squad and the Knights on March 9 saw the Wildcats collect 13 total hits, while holding the hosts to only six.
Deerfield pulled ahead by four runs in the bottom of the third inning before the Wildcats narrowed the gap by three runs in the top of the following frame. The visitors added six runs in the fifth inning to pull ahead 9-4, but the Knights answered with seven runs in the bottom half to pull back ahead 11-9.
Deerfield added another run in the sixth inning before the Wildcats tied the score 12-12 with a three-run seventh inning.
The Wildcats’ efforts to hold off the hosts in the bottom of the seventh fell just short and the Knights plated one runner to snag the walk-away win.
Patrick and Clint Sellars each collected three hits in the tilt, followed closely by Barry, who connected on two. Reid Ragsdale contributed three RBIs in the match while Patrick added two.
Sellars, Dylan Windham, and Lorne Barineau split time on the mound for the Wildcats, with Sellars striking out four batters.
The following day, the Wildcats hit the road for Buena Vista to take on the Marion County Eagles.
The Wildcats opened the scoring with two runs in the first inning and plated runners in the third and fifth innings to take the shutout win.
Patrick, Ragsdale, and Barry each connected on two hits in the match, with Barry leading the pack with a pair of RBIs. Patrick and Sellars each batted in one runner.
Patrick spent seven innings on the mound in the match, sending 14 Eagle batters back to the dugout.
When the Wildcats returned to their home field to battle the Crawford Eagles, the home team scattered 12 hits on their way to 10 runs. The pitching efforts of Sellars and Dylan Windham ensured that the Eagles would not collect a single hit in the game.
The Wildcats went up 3-0 in the first inning thanks, in part, to Barry’s two-run dinger.
Schley got the ball rolling again in the bottom of the third frame when Jordan Hall nailed a single and proceeded to steal second base. Hall completed his round trip when Barry belted a double deep into centerfield. Next up to the plate, Sellars repeated this performance, allowing Barry to come in after he swatted a hard double. Wade Law then took one for the team when he was plunked by an errant pitch.

MICHAEL MURRAY I ATR:
Schlay County’s Reid Ragsdale dives into third base to complete a steal during the fourth inning of the Wildcats’ March 14 home tilt against the Crawford County Eagles.

Cameron Belcher then popped up a shot which prompted the umpire to invoke the infield fly rule before Trent Bivins stepped up to the plate to nail another double and bring in Sellars, leaving the Wildcats up 6-0 when the Eagles returned to the dugout.
The ‘Cats quickly dispatched three successive Crawford batters to return to the plate in the bottom of the fourth frame.
Ragsdale opened with a single before stealing second base. Hall followed suit with a single, allowing Ragsdale to take off for third base. Hall then proceeded to steal second base, placing both runners within striking distance. Barry followed with another double, plating Hall and Ragsdale before advancing to third base on an error. Sellars then came through with a single to push Barry across the plate and Belcher followed with a single to bring in Alec Harris (pinch-running for Sellars) and bring the Wildcats’ tally to 10 runs.
For the final inning, Windham took the hill for the Wildcats to strike out a pair of batters and secure the 10-point win.
Sellars opened on the hill for the Wildcats, striking out six batters in four innings of work.
Hall and Barry both connected on three hits in the game, followed by Bivins and Sellars, who each collected two.
Barry contributed five RBIs to the win, followed by Sellars, who batted in two runners. Bivins and Belcher each contributed one RBI.
The Wildcats will return to action on March 21, traveling to Hawkinsville to battle the Red Devils. The Schley crew will get the chance to even the score against Deerfield-Windsor on March 23, hosting the Knights for a highly-anticipated rematch.