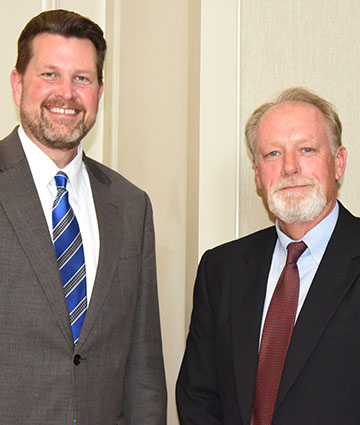 SGTC President John Watford is shown, at left, with Dan Linginfelter, who will be speaking at the 2017 Griffin Bell Convocation on March 29 at South Georgia Technical College.

AMERICUS — Dan Linginfelter, Senior Airworthiness Inspector for Gulfstream Aerospace and a 1979 aviation maintenance technology graduate from South Georgia Technical College (SGTC) , will be the featured speaker at the South Georgia Technical College Griffin B. Bell Convocation at 11 a.m. March 29 in the John M. Pope Industrial Technology Center on the South Georgia Technical College campus. The event is open to the public.
Linginfelter was recognized as the Technical College System of Georgia (TCSG) Distinguished Alumnus of the Year by Commissioner Gretchen Corbin at the TCSG Leadership Summit in Atlanta. He was also recognized by Georgia Governor Nathan Deal for his contributions to technical education through his aviation maintenance career at a special “Taste of TCSG” event in Atlanta.
Linginfelter used his education from SGTC, where he earned an A & P (airframe and powerplant) license, to make a tremendous impact in the aviation maintenance industry. He is currently living on St. Simons Island and enjoying his second “retirement” job.
He joined Gulfstream in 2015, after working with Certified Aviation Services, a leading provider of maintenance repair operation (MRO) services for fleet operators around the world. He served as director of operations and was responsible for supporting management and staff in both East Coast and West Coast stations as well as Los Angeles, Seattle, Ontario, CA; San Diego, Las Vegas and San Francisco. Prior to that he had retired from Delta Air Lines, where he worked for 32 years, most recently as Atlanta Station manager, International.
The Griffin B. Bell convocation was made possible by a donation from the late Judge Griffin Bell in an effort to bring outstanding individuals with expertise in business, science, or technology to the SGTC campus to encourage and inspire young people.
Other speakers have included:  Eric Lindbergh, grandson of Charles Lindbergh who soloed over the grounds of South Georgia Technical College; Charles Loudermilk, founder of Aaron’s Rents; Tom Young, retired Lockheed Martin and NASA executive; Dan Amos, AFLAC; Thomas A. Gales of Caterpillar Inc.; Cliff Oxford, STI Knowledge; James Blanchard, CEO of Synovus; Virgil Williams, chairman and CEO  of Williams Group International Inc., a diversified multi-company conglomerate with major subsidiaries in construction maintenance, civil and environmental engineering; A. James Clark of Clark Enterprises Inc., one of the largest privately held companies in the United States; George and Jackie Bryce of Star Racing in Americus; William Eames from Ireland who trained over the grounds of SGTC as a young member of the Royal Air Force during World War II; and Bruce Goddard, a best-selling author from Reynolds.